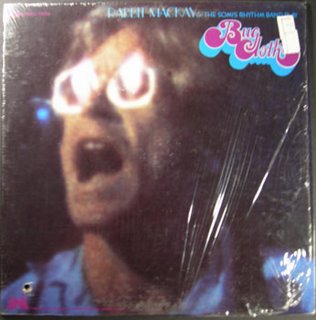 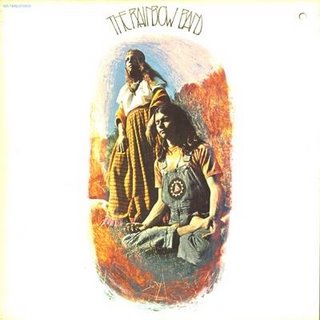 Not to be confused with the Danish band of the same name, this Rainbow Band was an American outfit that released one record on Elektra back in 1971. It never ceases to amaze me that there was a time when major labels put out really good records (technically Elektra was a major at this point, having been sold to Warner in 1970). This album appears in the Elektra catalog between the intriguing Crow Dog's Paradise' album of peyote songs & Mike Heron's fantastic Smiling Men With Bad Reputations record. So why all this talk about the Elektra catalog? Well, to be honest, it's because I know very little about the group that put together this very cool slice of rural, commune psych. I can give you a tracklist:
1. Rama Rama
2. Lotus
3. Sweater Song
4. Simple Song
5. Midnight Sun
6. Song of the Navajo
7. Now is the Time
And I can tell you who participated in the recording (although not what they did):
Mahesh, Pavarthi, Maruga Booker, Nithyan Gefron, Scotty Avedisian, Phil Catanzaro, Ragunath Mancini, Trevor Young, Gary Olerich, Darius Brubeck, Colin Wolcott, Nirmala, Sharon Simon, Lalitha, Janiki Tenny, Priscilla, Victoria, Felix, Anandi, & Shiva.
Some of the names are familiar. Colin Wolcott was a founding member of the group Oregon. Darius Brubeck, a jazz performer in his own right, is Dave Brubeck's son. Shiva is the "One who purifies everyone by the utterance of His name" in Hinduism--Ok, perhaps it's not the same Shiva. However, I can't say anything about the duo who fronted the outfit except that they look blissed out on the cover. This record also comes from the WMUC library--I hope you enjoy it.
Posted by Max at 12:35 PM 20 comments: 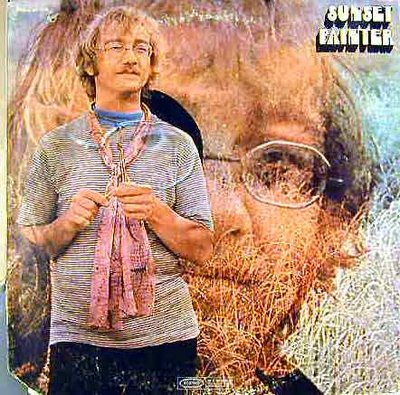 I promised weekly posts, so even though I'm incredibly overworked this weekend here you go. Just don't expect a lot of commentary--perhaps I'll add more at a later date.

Blessing was (he passed away, sadly, in 1994) a jazz & rock vibist who played in Advancement and the Cosmic Brotherhood as well as appearing on some Gabor Szabo releases. The album is almost entirely instrumental & features some cool covers (the Who, Judee Sill, Dylan, Beatles, Byrds) & nice originals too. A mellow 60s vibe that moves between jazz &amp; rock without commiting to either & without falling into the lounge category. Enjoy it reposted HERE.
Posted by Max at 6:33 PM 10 comments: 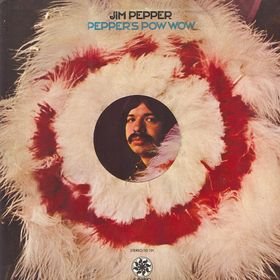 First off, this isn't my rip--it's another newsgroup grab. I wish I had kept track of the name of the poster but whoever he/she was he/she has my eternal thanks. This is a great record. It's criminal that it isn't available on CD--one online discography for Jim Pepper mentions a private label CD but I have been unable to find any further info & I believe that it was a bootleg recording.

Today Pepper may be better known among fusion jazz afficianados than fans of pop music who if anything only know his oft-covered hit "Witchi-Tai-To," a peyote chant Jim learned from his grandfather. A number of the other songs on this record are credited to his father, Gilbert (Gil) who plays on this records. So this is record that reflects (at least) three generations of musical input--really it reflects a lot longer tradition. Pepper was an American Indian--if you couldn't guess from listening to the record--his father was a Kaw and his mother a Creek. And this record is still, in IMHO, the finest fusion of American Indian musical traditions with other American musical styles. Pepper's first recording was as a member of the pioneer jazz-rock band (I hestitate to call them fusion) the Free Spirits. He also performed on a couple of rock records, Sandy Hurvitz's album and a single Fugs track, but most of his work was decidely jazz. He played tenor sax and flute with Don Cherry, Paul Motian, Larry Coryell, Bill Frisell, Mal Waldron & Charlie Haden among others (both as a leader & a sideman) and many of those recordings are in print. He has a fine full-bodied tone on the sax (which you can also hear on this record, which is now available on CD (and hence no longer available on this site).

Pepper's Pow Wow is an album that's harder to pidgeonhole. There's some jazz here and music that's in a Native American tradition but there's also more than a little pop, rock, gospel & soul going into it. It's one of those records that really defies genre but in a way that makes in appealing to fans of all the aforementioned styles. It is also one of the most uplifting records I've ever heard in spite of addressing subjects like America's genocidal campaigns against Native peoples and the continued racism against the American Indian. Overall it's just an exceptional album.

Jim Pepper passed away Feb 10, 1992 in Oregon, the state where he was born and raised. May he rest in peace. There is plenty of information available about him on the Web and there was a documentary about him a few years back. There's also a fine discography available from which the following information was taken. Note that the tracklist doesn't exactly match the rip I'm providing--I believe it's because 2 of the Witchi-Tai-To tracks are combined in these files.

An Update & A Promise of More Music on Its Way

My month off from blogging has passed quickly. Expect a new record this weekend. After that, I've got weekly posts lined up for October & November & at least half of Decemeber. Also, I try to stay on top of my links (removing dead ones & adding new ones) but it isn't easy to keep up with so many blogs (& I've only linked to the ones I like--I've found a lot more), so if you see a blog that's been down for more than a couple months let me know. I do make an exception for blogs that have moved to a new location but leave their archives on the original site, so no need to mention those.

I do have a question concerning which sharing service people prefer. I've had complaints about a few of the ones I've tried but r****share (the preffered service for bloggers) also has a lot of problems, not the least of which is their willingness to remove posts without question. Let me know what you prefer (perhaps I can set up an online poll).

During my hiatus I was happy to receive some emails from David Stoughton. He OKed my posting of the 1st one & so I'll put it up for your edification:

You might be interested to know that your blog made "GoogleAlerts" today. The eponymous David Stoughton is still alive, silly and pretentious.

Your preference for the more outrageous pieces is shared by a lot of weird people (my kind of people) who have a taste for the outrageous stuff we were able to get away with in the late '60s.

As you suggest, a number of CD re-issuers have tried to get the rights to Transformer, but are unable to for the reasons you state.

I was recently contacted by Elektra U.K. (Rhino) that they are putting out a boxed-set CD package of "The Holzman Years" at Elektra, and are including "The Sun Comes Up Each Day," from Transformer. Personally, I'd have preferred something more radical. But nobody asked for my input. At least they invited me to write some notes for the reissue, regarding what life was like back then in the music biz.

It was a hell of a lot cooler than it is now, that's for sure. The music (Beatles, Hendrix, et al.) was cooler, too.

Needless to say, I was a little embarassed by my "silly and pretentious" comment and after thinking about it I wish I had said a few more positive things about the record as well. As I mentioned to him, I find the Beatles silly & pretentious at times too. I do appreciate though his willingness to experiment (& on a major label debut)--he could have made a safer record that would have sold better--but he took chances and that makes his a record worth listening to years later. I'm glad to hear he's still around and seems to be doing well.
Posted by Max at 8:54 AM 2 comments: