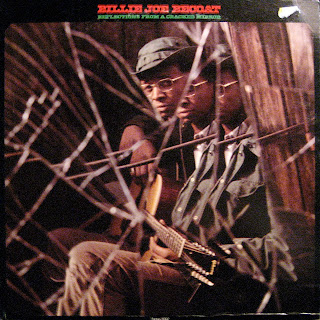 I promised an April post and since I have been too busy to copy an LP of my own, I'm reposting this excellent Billy Joe Becoat album. I think it originally appeared on the excellent Retelephone66 blog, one of a number of fine blog that has been getting hammered lately by DMCA complaints (despite the fact that over 1/3rd of the complaints Google receives are not from legitimate copywrite holders & probably none of the albums he's posted are the property of the artists that recorded them). Hopefully, I will avoid a similar fate since this, like all my current posts, has never been reissued and is only available in used record stores. Anyway, since Redtelephone has reposted some of my "rips" I don't think he'll mind me putting this one up.

Billie Joe Becoat released two LPs, of which this is the first, before leaving the music scene and inventing the 2-wheeled drive bicycle (which, I'm pretty sure, was a much more profitable enterprise). He is another fine African-American folk singer, who has been unjustly overlooked. On this album he sings about people setting the cities on fire, about being abandoned by his lover, and about the lives of the poor and dispossessed. Although he's not without a sense of humor about it too--check his satirical Dylan rewrite on "Hi Fiddle De Fi" and the pointed irony on tracks like "I've Got Everything I Need" and "I'm a Good Man, a Fine Man." The arrangements are fairly sparse, consisting of Becoat's acoustic guitar and harmonica and a rhythm section of acoustic bass and occassional tamborine. His voice is pretty good too. But it's the verbal play of Becoat's songs that are the real highlight here. Give it a listen.

As an aside, the record was produced by Ray Shanklin who was a composer for Ralph Bakshi's Fritz the Cat and Heavy Traffic (both great soundtracks).
Posted by Max at 7:28 PM 15 comments: