Blame Microsoft for the Lack of a Proper Post this Week 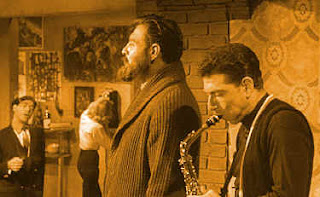 I'm still contending with major changes & major screw-ups resulting from a switch from Windows XP to Vista. In addition to the fact that most of the CDs I recorded with previous versions of windows no longer run on my computer, I'm having trouble reinstalling CoolEdit (my software of choice for soundediting--I know it's outdated!). If anyone knows how to enter the serial number for CoolEdit 2000--I have a licensed copy--please let me know.

So enough with the excuses for why I didn't post a record this week--I don't want to leave you without something to listen to--so here is my rip of the opening beatnik jazz poem from the Roger Corman classic Bucket of Blood as performed by Paul Horn and Julian Burton (in the persona of beat poet Maxwell H. Brock).

Life is an obscure hobo, bumming a ride on the omnibus of art!

Burn gas buggies, and whip your sour cream of circumstance and hope.

And go ahead and sleep your bloody heads off.

Creation is, all else is not.

What is not creation is graham crackers. 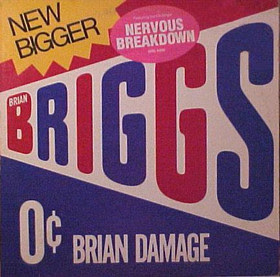 I'm still in the middle of making a long & painful transition between computers, so I haven't had time to rip any new records this week. Instead I've pulled one from my collection of other peoples' posts (another from a newsgroup--props to the original poster).

Brian Briggs real name was John Holbrook and he was (and, as far as I know, still is) a well-respected mixer and sound engineer who worked at Todd Rundgren's Bearsville Records and, prior to that, at IBC studios in London. In his role as engineer/mixer he worked on the Who's Tommy & Hendrix's Electric Ladyland (at IBC) and with Utopia, Ian Hunter, & the Isley Brothers (at Bearsville). He's likely to be the only artist posted here with multiple Grammy wins (albeit not for his own recordings). He also played guitar on the Five Day Rain's sole album, which is available at the great Lost-In-Tyme blog. More recently he's composed music for TV shows & commercials.

So what about this record? Well, for lack of a better term, I'd call it an underappreciated New Wave classic. But really Briggs' knowledge of the entire rock & roll tradition comes into play as he touches (musically) on a dozen different musical styles popular at the time including rockabilly revival, synth-based new wave, mod rock, surf instrumental, and even world-music. Probably my favorite track is "See You on the Other Side" about 2 guys playing chicken with a train on their scooters--it ends as one might expect but its synth percussion, rock-n-roll guitar licks, & 60's pop girl chorus make it rise to the level of grand musical pastiche. There are also great covers of Eddie Cochran's Nervous Breakdown & Terry Randazzo's Goin' Out of My Head. A second record, Combat Zone, came out in 1982, but I guess neither brought the fame & rewards they deserved.

You can listen to it here. 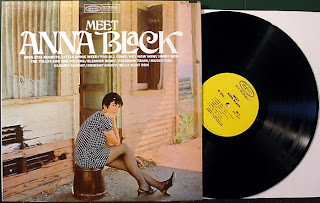 Well I had actually planned for you to meet Sarofeen & Smoke this week but when it came time to prepare the rip I had made for posting (seperating the tracks, removing clicks & converting to MP3s) I discovered some problems with the sound. Since I'm now in the process of changing over to a new computer I probably won't get to rerip it for a couple weeks, but it is on its way along with the Cheryl Dilcher, which someone else asked for. So instead I bring you another female vocalist, as good in her own way as those previously mentioned.

Anna Black, according to the liner notes, was born in Oklahoma City, is part Chickasaw Indian, and likes/liked sardines smothered in chile. She's against fear, waste, and war. And she cuts her own hair. The liner notes contain some other useless details but I won't bore you with them. What's important is that she has an excellent voice and writes a pretty good song. This record ranges over a pretty wide range of musical territory including some jazz standards (i.e., Gloomy Sunday & Miss Otis Regrets) and a creepy Beatles cover (Eleanor Rigby, which, come to think of it, was covered by jazz singers at the time too).

Black's own songs (the best one's on the record) generally fall into the country-swamp-funk category--think Tony Joe White or "an overlooked gem in the vein of Southern white songstresses like Bobbie Gentry" (which is what the reviewer for the allmusic.com has to say about this release). Lysergia.com calls it "femme folk psych" but that's probably the drugs talking because I don't hear much psych and just a touch of folk here. However, if you want a somewhat funky/somewhat soulful musical perspective on Southern, country living (as imagined in the pop songs of the 1960s) you have some excellent examples here in You-All Come, Muddy Hay & Billy Goat Run.

All-in-all this is a fun, fine record. Black went on to record one other lp the following year, which I haven't heard but would like to.

Here's the tracklist for this one:

Listen to it here. 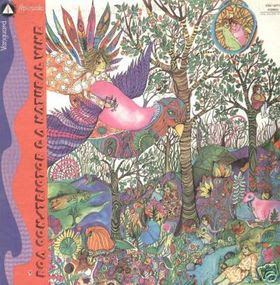 Well my new computer has yet to arrive but I didn't want another week to go by without a post--and really folks this one was too good to hold onto. Boa Constrictor and Natural Vine were a psych-folk duo who recorded this, their sole record, for Vanguard Apostolic.
Given the current vogue for acid-folk I'm suprised this one is not better known. It has all the elements one looks for in that genre and few others as well. There are some really deranged, acid-drenched compositions like Devil & the Ace of Spades (with its backward tape loops, mornful sax, and downer guitar strumming) as well as dissonant, freaky, rocking, blues numbers like Time is Money. Their music, while it owes something to other folk-experimentalists from the late 60s is also inspired by classic, country blues and at times they come off as a sort of hippie ancestor of garage-blues-rock duos like the Bassholes or Black Keys.
The artist who did the cover, Phoebe Stone, went on to some success as a children's book author & illustrator. Unfortunately I don't know what happened to George & Ben, who recorded this masterpiece.
Speaking of the cover, you might notice an ebay logo in the bottom corner. I actually grabbed this illustration off the Rate Your Music site and they stole it from ebay. Just to set the record straight.
Tracklist
Side A
1. Little David
2. Pig Quick-Finger
3. Devil & the Ace of Spades
4. Son of Kong
5. Down Child
Side B
6. Time is Money
7. Alligator Man
8. Sundown Stick
9. Don't Try To Hide from the Lightning
10. Build Your Wall
The record is ripped from vinyl and encoded at variable bitrate-extreme settings. Because most of the tracks run together it was sometimes difficult to clearly seperate 2 tracks & in a couple of cases I left them combined rather than compromising the integrity of the sound. There was also some soft crackle and surface noise on the record that I wasn't able to clean up (it's actually much easier to deal with sharp clicks and pops) and so it remains in places.
I hope you'll enjoy it as much as I have. Listen.
Posted by Max at 5:59 PM 16 comments: