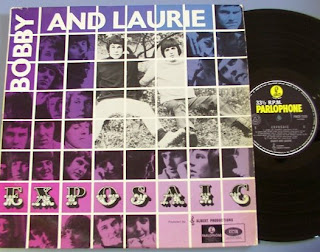 Bobby Bright & Laurie Allen were an Australian duo who started performing in the beat-pop vein in 1965. Exposiac is their last record and from what I've read is a major departure from their earlier work venturing into country rock territory with some nice psychedelic and pop flourishes as well as a couple tracks that try to capture a Dylanesque sound. Most of the tracks are originals but there are also nice covers of High Noon and Long Black Veil. All-in-all it's a great record from a group that I expect is pretty unknown to American audiences (not sure how well they were distributed in other parts of the world).

The duo broke up soon after this, although they reformed a couple years later (in 1969) and released a couple singles, also in a country vein. As their discography shows, they also put out a few solo releases. Sadly, Laurie Allen passed away in 2002.

Thanks to Micko at the Midoztouch board (you can find the link in the blog list to right of your screen) for supplying this rip. It's a nice high quality variable bit rate rip from vinyl, as always.

Also, note that the ID-tags for the tracks are incorrect but the seperate files are (to the best of my knowledge) labelled correctly. The file also contains one track, I Want Woman, that was recorded for this album but not included on it.

A request and a promise 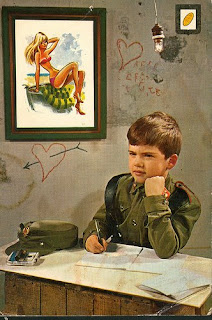 First, I wanted to let people know I will have another post (although not my own rip) before the month is over. So expect some new music soon & that's a/the promise.

Second, as you are probably aware (if you read my last post) I lost a number of the rips I had previously posted here. Many of these I could get from the blog itself but there are a few that are not available and, in order to repost them, I'm hoping some of you can supply me with copies. The posts I'm looking for are (1) the Sidewalk Swingers, (2) Rosemary Haddad, and (3) Andy Zwerling. If you don't want to post a link in the comments, drop me an email (you can get the address through my blogger profile). Thanks in advance.

Finally, some news on a couple blog-related topics. I recently got my copy of Kathe Green's Run the Length of Your Wildness from Rev-Ola. It sounds great and I suggest you all buy it. The liner notes refer to this blog, although not by name, as the place the Rev-Ola producer 1st came across this great release. It's nice to now we had a hand it getting it rereleased. Bruce Murdoch also has a new CD coming out, although I still am looking for it myself and when I find out where you can get a copy I'll let you know.