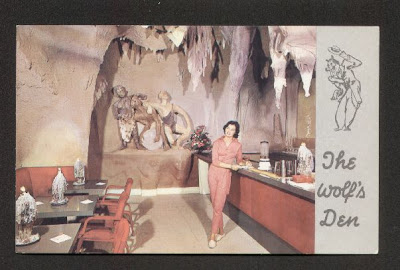 I didn't have time to rip & post an album for you this month, so I dragged out a very-obscure and pretty scratchy single for your audio enjoyment. I can tell you nothing about Bill Hershey & his Almonds except that they recorded this for Gulf Records (which gave it the catalogue number 27). I'm guessing its from the early 60s. Bill Hershey and his gang sound like they could have performed at the Wolf's Den (see picture) and would have fit right in on one of the Las Vegas Grind compilations. These songs include Yogi Berra imitations (or maybe Yogi bear imitations), silly Dracula voices, and lyrics that touch on fun subjects like bikinis and doctors. What can I say except "It's a gas!" Listen here. I'll be back next month with a full album for ya.
Posted by Max at 7:11 AM 6 comments: