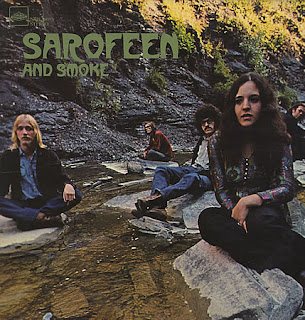 I had ripped a copy of this record a couple weeks ago but had some problems with the rip. Before I could rerip I found another version (generously provided by abracadabra) that I think is quite good (ripped at 320k) & so I've decided to post that one instead of my own, thus saving myself some much needed time while still bestowing upon you this jewel of an album. Sarofeen's vocal style has been compared to Janis Joplin, Ellen McIllwaine, & the Shocking Blue's (recently deceased) Mariska Veres, and if you like those vocalists you should give her a chance. Even if you don't like that heavy, bluesy 60's female vocal style you should still give it a try. Sarofeen & John Martin (especially the latter) wrote some excellent material for the album and the band (listed below) is strong:
Dave Arliss - bass
John "Zilch" Martin - keyboards, harmonica, guitar
Anne Sarofeen - vocals
Ed "Duke" Shanahan - lead guitar
Jim Watts - drums, pecussion
Anonymous - horns
And here's a tracklist:

Anne Sarofeen also performed on broadway in A Hard Job Being God and later recorded a second album (sans Smoke) entitled Love In A Woman's Heart, which I didn't find as good as this release. Smoke (& Sarofeen presumably) were originally from Auburn, NY, and at least one member of the band, guitarist Ed "Duke" Shanahan continues to perform in that area. He also recordedd with the band Siddhartha (for RCA) in the year before this release and has performed with blues and r&b legends like Muddy Waters, James Cotton, Bobby Comstock, & Bo Diddley. I'm not sure what Sarofeen is up to these days.

You can hear the music here.

I have a couple other bits of news. 1st, (as you can probably see) I went ahead an put some google ads on the blog to help pay for a new turntable. If you get a chance click on one (or more)--the help is appreciated. 2nd, this will likely be my last post until September. I've got some vacation time coming up as well as a lot of work at the moment, so don't expect another post for a few weeks. Hope you all are having an excellent summer!