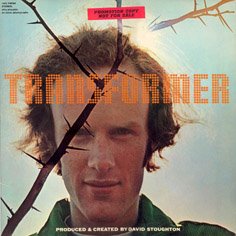 This is definitely Stoughton’s show. In addition to performing, he wrote the songs and produced the sucker. Some pieces are songs, sort of in late-period Tim Buckley style (but missing Buckley’s vocal skills & songwriting ability) while others are weirder experiments in sound collage (The Anecdote of Horatio and Julie) or extended semi-classical psychedelic (or is it semi-psychedelic classical) concertos (I Don't Know If It's You). Personally, I prefer these more experimental pieces—his other songs, lyrically at least, generally seem a little silly and/or pretentious (a bad combination).

As always, this record is unavailable on CD and is unlikely to appear in that form any time soon. Polygram owns the rights to the recordings and have no interest in releasing it on CD in spite of requests by fans. They also, from what I have read, appear to be asking an exorbitant amount for other labels to issue it and because we’re talking about a major label it’s unlikely anyone will put a copy without securing the rights. Unfortunately major labels are only interested in a recording if it will make lots of money but remain paranoid about keeping the rights to any recording they have, so if you want to get this album you’ll have to search ebay, etc. for a used copy (which can run anywhere from $10 to $60). Again, props to the WMUC record library.

Tracklist and performers below

I’ll try to get another post in next week, but after that I’m off for the rest of September but you’ll find tons of great music in the sites linked over on the right side of the page (that’s your right, not mine).
Posted by Max at 6:03 AM

thanks a lot
for your holidays try this
http://www.megaupload.com/?d=5G5IC50Y
unique hypno-folk-rock from italy
criminally out of print
cheers

Speaking of 1968 - don't forget that Cake album you mentioned a couple weeks ago. I'm on the edge of my couch over here. Thanks.

Man, nobody told me the Muppets were on...I love the muppets. Especially the hippie girl with the long hair in braids. Peace.

Nice...I have a real beater copy of this, the album's not quite good enough to shell out for an upgrade but it certainly a fun listen. Thanks!

Thanks for this one. Dunno how I missed this one when I was 15, but I'm glad to have it now. Excellent sound, too.

I got this on LP in a used music store a week or so ago simply because it looked like it might be weird and great.

The description in the blog is accurate. Not as revelatory as one would wish, but a definite period piece.

any chance to repost?

At Last. Thank you so very much