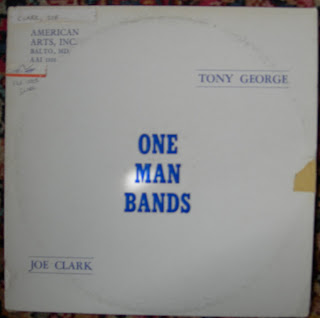 Here is that private press, 70's. moog-psych record I promised a while back. Although technically I should have only promised half a record of moog-psych (as I will explain).

Now I really know nothing about Tony George (aka Anthony M. George), Joe Clark (aka Joseph A. Clark), or the American Arts, Inc. record label out of Baltimore. This was the 1st (& I suspect the last) release on the label and, as Clark & George play all the instruments on their respective sides as well as listing themselves as composers, producers & engineers, I suspect they also fronted the cash for the record. But I do have opinions.

The l.p. is a split release between two artists whose only common denominator appears to be that they are the sole performer on their side of the record.

The real ace here is Tony George's extended, moog-psych-freakout, "And He Thought" (the sub-parts are labelled in the tracklist below). There is some deep, crypto-religous/philosophical message here but unless you've obtained (however temporarily) some alternate state of consciousness I wouldn't worry about it but just sit back and coast on Tony's sine wave interupted by the occassional rant. Tony asks, "Did you ever think happiness is to know me?" I'm pretty sure the answer before listening will be no (& I'm pretty sure none of you have heard this before), but afterward you may change your answer. Or maybe not. Happiness is not the word I would chose to describe your listening experience, but this is some weird-ass shit.

Joe Clark also performs solo but is certainly using some multitracking as he plays more conventional rock instruments. Clark's side has its moments and the music is fine, but I wouldn't have posted it if it weren't weren't paired with Tony George. Clark generally sounds like low-budget, late-60s/early-70s rock with some psych influences. There are also some odd moments--like the song about America (it was the bicentenial). However, overall, I think Joe would have been better off if he skipped the lyrics entirely. Sometimes they get downright confusing (& not in a weird, stream-of-conciousness, psychedelic way)--e.g., who is being addressed in "Don't Turn Your Back" (the 1st song)--it seems to change part way through the song? Other tracks (like Dreaming of You & Drinkin' 'n' Thinkin'...) are nice enough pop songs but never more than component.

If, by chance, anyone out there knows anything about this record (or has even seen it before)--please drop an email or post a comment.

I ripped this from a copy in the WMUC record library & have never seen even a mention of it elsewhere.

Do you happen to have anything by Peter Straker. He was a friend of Freddy Mercury!

Sorry, no Peter Straker. I'll keep an eye out for him though.
Max

this is insane.
totally rediculous cosmic consciousness trying to be psychedelic... and doing a damn fine job of it. funny... seems like it had a purpoise other than being a hit record. like a message he intended to play for his dream girl or a class project or somthin. thanks a million for posting it! we'd not have it other wise, cause yeah, no info seems to exist anywhere.

Strangely enough, I've come across a 45 at a Baltimore Goodwill that features two Joe Clark songs not on this album: "Tonight" and "We Love It We Like It". Same record label. This is the only site I've found that even mentions the guy.