A question & a correction 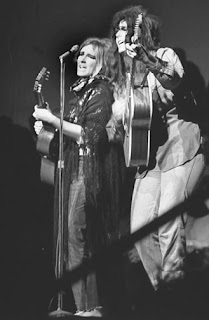 OK, the correction 1st--that is Kathe Green (who recorded the Run the Length of Your Wildness album I posted last July) on the right performing there with Glenn Close on tour with Up With People. Green, Close, Virginia Entwistle and Jennie Dorn formed the Green Glenn Singers who were a central part of the 1st Up With People performances. I had previously said that I thought it was a different Kathe Green in the group. By the way, Up With People is still going strong. Thanks to Kathe/Kate and to her sister Babbie both of whom (indepently) set the record straight.
Now onto the question. First, I should say that the sound quality on my current cheapo turntable has never been great but it seems to have gotten worse recently (not that I every played it much since all I use it for is to record lps for this blog) and so I was thinking of replacing the cartridge with a better one. That's when I discovered that the crappy Sony LX-250H doesn't have a replaceable cartridge. So that leaves me one option, purchasing a new turntable. So is that the question, what turntable should I get? No. Although I am interested in hearing opinions on that subject as well. My question has to do with financing this new project. How would you, my readership, feel about me adding some ads (probably the little Google ones) to help pay for this equipment upgrade. I'm not looking to make big bucks here (on any bucks for that matter) but it would be nice not to be spending a lot of money to bring you this blog. Of course, if I did get some ads up they would only generate money if people clicked on them every once and a while. So that they wouldn't help if people were so opposed to them that they ignored their existence. Anyway, let me know your opinions on the subject. Should I get ads and a better turntable for recording blog posts or just leave things the way they are?
Also, don't worry there is a new music post coming sometime this weekend.
Posted by Max at 11:06 AM

hi, i wouldn't mind if u had to get ads up to pay for a new turntable ! I appreciate the time and effort ..and money... that u put into this site, so that we could download the music. Do what u gotta do, man !!!

Ads are fine, s long as they are not the only thing you see on the site.
I know the service you provide costs in time and money.

agreed - I enjoy this blog and as long as you avoid pop-ups, pop-unders or the one's that reroute you to a frame you have to click past, I'm fine. I'll even click for you.

I have tried the same on my blog www.not-rock-on.blogspot.com.

I included links to paypal a few months ago, but nobody of the ca. 300 people that look at the blog every day thought of leaving a payment. I think we have to live with the fact that people just download and don't think about rewarding the bloggers with at least a comment, don't think of adding to the costs!

Thanks for your posts!