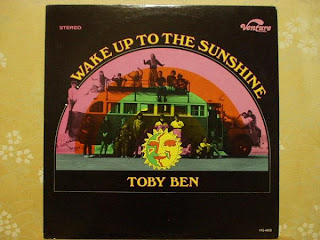 This month's post (and I am on a monthly posting schedule until further notice) is courtesy of "abracadabra" who kindly provided a rip of this soulful, 60's rock record released on the Venture label. Toby Ben was the stage name of the singer who has since recorded under his real name, Jon Ben Berger.
This record features a combination of blues- and soul-inspired music and hippie sensibility that should have given it a wide audience at the time of its release but apparently did not. Perhaps the fact that he recorded for a label best known for its soul records may have hindered him. His about love, loss, hippie chicks (Salliey is a classic in the latter category), the war (Draft Call), and the joy of living (Peace, Wake Up to the Sunshine) are all well-written and touch on the appropriate topics of the day. I also like his vocals, which have a very soulful quality.
Jon Ben Berger's musical career started on the East Coast, where he performed as a folk singer at the Gaslight & the Bitter End. He later headed west to San Francisco where he formed the group Burning Bush and then as Toby Ben. He went back to New York at some point thereafter and was involved in collaborative projects with members of the Phillip Glass Ensemble, director and dancers from Merce Cunningham's troupe. Nowadays he lives and performs in Stockholm, Sweden and has new material available (check the prior link). There's a video online for a cool blues song he did recently for a film about St. Francis (I think) that's definitely worth checking out as well.
You can get the music here.
One other note, I am trying to regularly update the links, which I consider an important part of the blog. A lot of blogs are disappearing and others are going private--in both cases I'm deleting the links. I'm also deleting ones that haven't updated for a year or so. At the same time, there are a lot of new blogs out. The newer ones, in case you weren't aware, can be found at the bottom of the list for each letter but not at the very bottom (as that's where I tend to put blogs that don't feature full albums). If you enjoy this or any other releases please leave a comment or send an email. I think that if I got more comments/emails I might post more often.
Posted by Max at 10:13 AM

I heard this, way back when. Very nice surprise to be able to listen again. Thank you.

Toby Ben!! hugely appreciated
That opening cut [when it starts in the CD changer it always hits with "Who on earth IS that?!" force]...and many that follow!
the rarer the better

never heard of this album before.
got it from here and i´m loving it.
thanks a lot!

Thanks for this obscurity!

Thanks everyone for the comments--glad people are digging this. I hope to get the Aesop & the Fables album up this coming month & maybed start posting twice a month thereafter.

Thanks a lot, a very enjoyable album.

Hi Antonios,
I'll repost the Perna & the Marr but the Jim Pepper & Click recordings are now available on CD and thus have intentionally been removed. The posts/comments for those 2 albums have some more info on where you can find the CDs if you're interested.
Max

Thanks for all the shares thru the years. Been hunting for Aesop's Fables - In Due Time (Cadet), is this something you might have?

I had intended to rip & post Aesop's Fables this month but it's been a rather hectic month so far so expect to see it in May instead.

Thanks for this! I lost my copy long ago and missed it terribly.

I remember Toby Ben when he was doing the cooffee house circuit in '68-'69. I saw him once or twice at Oneonta State

Thank you so much for posting this! One of my favorite albums ever. What a pearl! Si soulful and filled with love. Unique