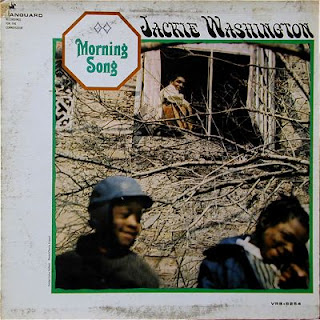 Jackie Washington was born in Ontario in 1919 and began performing at age 5, singing with The 4 Washington Brothers (the other 3 being his brothers Ormsby, Harold & Doc). By the early 60’s he had started playing folk music and made his way to Greenwich Village, signing soon after with Vanguard Records and appearing on their 1961 compilation New Folks (along with the Greenbriar Boys, Hedy West & David Gude). His first, self-titled solo album appeared in 1962. This was his 4th album and the last of his 1960s recordings. If you want more info on his Vanguard years, you can see a pretty complete discography of that era here.

This was his 4th album and the last of his 1960s recordings. While his first 3 albums featured him performing solo, on Morning Song he ventured more into pop and folk rock territory and was accompanied by Mitch Greenhill & John Nagy on electric guitars, Alvin Rogers on drums and Seldon Powell on alto, with some string accompaniments conducted by Felix Pappalardi.Washington is not remembered today by most Americans (Canadians may have a different perspective) as a top-tier folk artist but he was well known and respected in the early 60s folk scene. Supposedly Bob Dylan, even cribbed from Washington’s arrangement of “Nottamun Town” on the track “Masters of War.”

On the All Music Guide site, Richie Unterberger pans the album (as he does many albums it seems) complaining that the “songs are not good, moving, or very melodic, and his voice is pleasant but no more than adequate.” But while it’s not Dylan or even Fred Neil, I certainly find much to like about the record. There are some really excellent tracks here, including the mock-Dylan satire “Long Black Cadillac” (which Unterberger, ignoring the history between Dylan and Washington, calls a “silly-sounding Bob Dylan sound-alike”) and “A Night in June” (for which he has more appreciation). And while a few of the other tracks are certainly duds, the overall effect is entertaining and just different enough from the standard folk fare of the era to be worth a listen or more. But don't trust my review either, listen to the music and make up your own mind.
Here’s a tracklist:
1. Morning Song
2. Long Black Cadillac
3. Clouds
4. Harry The Rat
5. You Can't Buy Me Back
6. Well Taken Care Of
7. Lily Of The West
8. Phone Call
9. Blue Balloon
10. A Night In June
11. Hello, Anne
12. Esta Navidad

In the future, I hope to feature some other releases by African-American folk singers (I know, technically Washington is African-Caribbean-Canadian) like Leon Bibb and Casey Anderson. Next post, however, will be some cool late-60's pop music from Bill Tinker.

Gave this a brief, cursory listen, and I must say, I'm duly impressed by what I've heard thus far ("Long Black Cadillac" is great!).

Great Great Album. Many Many Thanks.

Hello Max,
Thanks again for a wonderful post, looking forward
to the Bill Tinker Lp.

You said it Max! ... Unterberger is always putting down some excellent albums at AMG... I can't stand it...

Keep on with the good job!
Milo

Thanks for all great albums so far!

Max : Jackie has opened the Home County Folk Festival in London Ont Canada every year since it started he is the only performer to play every one , I have met with , talked with and even got to jam with him < every summer I look forward to seeing him . He is truely a Canadian treasure just like Doc Watson the American treasure . Steve

thank you max!
i'm looking for this

The Jackie that "jazzme" saw at the Ontario Folk Festival is NOT the same Jackie that recorded this album. This Jackie Washington also goes by the name Jack Landron.

They often get confused because of the name. The Canadian Jackie Washington is around 20 years older and sticks to more blues/jazz. His brothers were all singers/musicians from Hamilton Canada and began in the 1930's