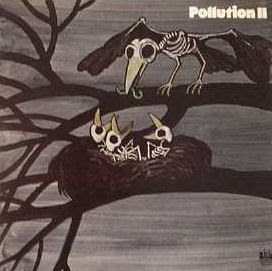 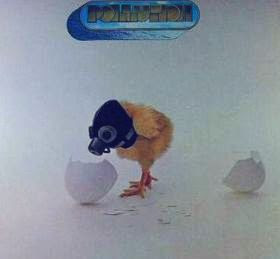 Pollution put out three albums of soulful rock in the late 60s/early 70s--the 2nd and 3rd of which (the most soulful) are presented here for your listening pleasure thanks to the kind contributions of two of your fellow blog readers. (Note: For others of you who have some hard-to-find MP3 copies of good music that is not in-print and never issued on vinyl, drop me a line if you want to see it posted here in like fashion).

The band was managed by Max Baer Jr., son of the onetime World Heavyweight champion and the actor who played Jethro on the Beverly Hillbillies. This didn't appear to help their career as much as one might expect since, by all accounts, he was a lousy manager. He did better as a movie producer having put out some profitable gems like Macon County Line & Ode to Billie Joe.

James Quill Smith still performs and has a recent CD. Vocalists Dobie Gray (who appears on the 1st but not the 2nd of these) and Tata Vega (who appears on both) both went on to productive careers that continue to this day, and at least some of the other band members are still playing music as well. Pianist Ronnie Barron, in addition to his musical efforts, also went on to play the sleazy bartender in Steven Seagal's Above the Law.

Prophesy Records, which issued both of these albumes, was distributed by Atlantic that only had a few releases including a couple Kraut rock bands, a Clifton Chenier album & Quincy Jones' soundtrack for The Hot Rock--odd selection to say the least.

Interestingly, Pollution I won a Grammy for it's cover (done by Gene Brownell). It's a good cover but I like the one for Pollution II better. On the other hand, I prefer the music on the 1st one.

The music on both releases is soul-inspired rock with horns and occassional nods to country rock. I wouldn't call it psychedelic but it definitely draws on 60s era rock as well as period social concerns. The first album is is the funkiest of the two, in part because of the contribution of Dobie Gray, who has a much more soulful sound than the vocalists on the 2ns album.

The first album is in mono and encoded at 128 kbps. The second is at 192 kbps and is in stereo. Both have some clicks and pops and the first album was over-modulated, although I did lower the volume some distortion remains.

Tracklist for Pollution I

NOTE: There's a new recording of Pollution I up with better sound quality. If you enjoyed the album before, you should grab the new file.

What a highly informative, concisely-written post, Max. I have to tell you, the sound on the first recording is definitely much better on the edited version than the copy I sent to you -- MUCH BETTER. I can't thank you enough.

And a little clarification, if I may? Dobie Gray was featured on the third album, as the credits state that he sang vocals on "Hospitals" "Vegetable Soup" and "Allen P. Alder". I guess he just wasn't willing to reach into the deepest recesses of his soul on the third outing.

Ah, well. I feel that the third album should've featured more Tata and less "Smitty" -- my opinion of course.

Hi Mark,
I agree about more Tata on Pollution II. As for Dobie Gray's presence, I'll have to listen again--I based the comment on what it says on Gray's web site

There it states "This is Gray’s only musical endeavor as a member of a group" in reference to Pollution I.

Thanks again for the sending these my way.

You're quite welcome. I actually discovered this band while researching a Carmen Vega record that I was on the hunt for several months ago (her solo debut, "Full Speed Ahead"); I'd read decent things about the album, and being a vinylphile, searched high and low to acquire a copy.

I'll delve into my collection sometime in the near future and see if there are any jewels that you (and your readers) may take an interest in. Until then, I remain a faithful reader myself, and wish you all of the best in the near future. This weblog is among the greats.

ronnie barron is a new orleans dude and long-time friend of dr. john. in fact he was going to be dr. john but backed out and mac rebbenak stepped in!

Very interesting, "Anonymous". It's hard to imagine anyone other than Mr. Rebennack assuming the role.

You learn something new everyday.

Thanks for all the great albums here.

Maybe you can help; I'm looking for
a solo album Bubba Fowler made: "here comes Bubba"
Bubba Fowler played guitar, banjo and bass on the Leonard Cohen album "songs of love and hate" and played with Bob Dylan.

Do you know this Bubba Fowler album?

Hi J Thyme,
I don't know of any that specialize in Mexican music but there are a number of Latin American blogs (& some from elsewhere) that occasionally feature some of that music. It's probably easier to find a specific album/artist.

Hey Max, I've moved in the past months & now reside in Houston, Tx. One of my friends is half Mexican & half Spanish. He's asked me if I know of any outstanding discs from the 60's & 70's from Mexican groups. If you know of any discs worth remembering, then please flash on me. OK?

The Bside Of The Leisure said...

Sorry I've been a bit busy but your friend may way to check out some compilations of Mexican 60s acts and then search for some of the bands he likes. Try these:

Here is a Mexican rock blog:

Both old and more recent stuff.

Rickdog's collected over 5,000 mp3blog links, accessible from the alpha menu at page top. You can open frames on these blogs to view them directly on my site, and you can also view the feeds in a frame.

Hi Max
As Mark said earlier, Dobie Gray is credited on Pollution II as "lead vocals and percussion" ... I had to dig my copy out to check. I've got a mint copy on Prophesy Records SD 6057 - I can send you a scan of the rear of the cover showing the full band list if you wish.
Roy

Roy,
I don't doubt that Dobie Gray is listed on or played on II, it's just that he seems to have forgotten about it according to his web siyte.
Max

Max, have to say I do love the blog.. came here originally looking for info on the Aesop's Fables lps but stuck around for all the other great content. While reading your review of these albums, I couldn't help but think of Brethren who released two lps on Tiffany in the 70's and who also collaborated with Dr. John (he plays on their first lp and wrote 1 or more songs on the 2nd), anyhow, if you're not aware of it, definately worth checking out..

Hi Max,
My name is John G. Smith, I am the son of James Quill Smith.I enjoyed your "review".Just a little clarification...the download you have listed as pollution 1 is actually heir: pollution{and really was a completely different band} than the Pollution 1 and 2 line up,,,the one you have listed as pollution 2 is pollution 2...anyway...I was wondering if there is a download available of Pollution 1 (the chicken album as it was known)I recently found and purchased Pollution 1 and 2 but have no turntable to make the transfer yet.Also where did you come across heir: pollution?Anyway,thanks again and if you need anymore details for this blog I am sure I could provide some interesting stuff...for instance Chris Mostert was/is touring with the Eagles and Tata Vega was/is with Andre Crouch..Also they were one of the hottest bands in L.A but the label would not promote them so... it kind of fell apart...My Dad was on the hook to deliver another album and thats it in a nutshell.My Dad went on to play with Three Dog Night (Coming down your way,,,the last album they made)4-5 albums with John Mayall (Bluesbreakers)Dr. John,Roger Mcguinn (byrds)and many,many,many others....Cheers, John G. Smith

P.S. Mr. Masuda-Dobie Gray was on Pollution 2...this second album was during a lot of BULLSHIT with their label,lack of promotion,getting funny with thier money,everybody was burned out etc. so its no wonder it didnt turn out quite as well as pollution 1,Dobie Gray did go on to record the clssic "Drift Away" which was covered by the Stones,Poison and most recently Uncle Cracker...Also my old man was under pressure to deliver this last album..so there is the the story from someone who was there.GOTTA STICK UP FOR THE OLD MAN!!!!!!!!!!!!!!!!!!!!!!be cool

Hi John,
Thanks for the additional info. This was not one of the posts that I copied myself, so I was relying on what someone else had said. I will check up to see if there's a copy of the other Pollution release available.
Max

Would love to get a copy of Pollution 1 (that's really them)
John - I saw your dad at the Whisky in Sylvester & The Hot Band.
They we tight live! Christiaan and Kerry Hatch were standouts with your dad. I believe this was the group after Pollution.
Here's a link to the album:
http://disco2go.blogspot.com/2010/03/sylvester-and-hot-band-1974-bazaar.html
I still remember that band. Was glad to see Kerry late on Tom Jans "Dark Blond" album.
- Cheers

Find them on my channel

MY GOD ! I HAVE BEEN LOOKING FOR THAT VEGETABLE SOUP TRACK FOR 3 YEARS NOW, HEARD IT ON ANDY VOTEL'S SONGS IN THE KEY OF DEATH, THANK YOU SO VERY MUCH :)

Hi. This is John Lambert, bass player on all those Pollution albums plus with a prior group Beethoven Soul on Dot Records. Dobie and I became best friends even went camping in the LA mountains. There is a thousand stories that surround the
Pollution group. Tata went on and hooked up with Sir Elton John and toured the world . I can offer more headline news if everyone wants to read it. Let me know.

I found a post of the back of this album and even though the Dobie Grey website does not mention it, the personnel listing does indeed confirm Gray's presence on the second LP.