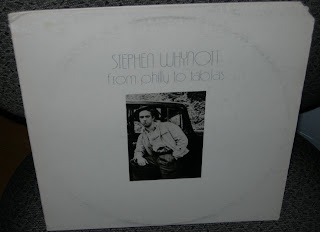 Here's a somewhat odd release that I think some of you will enjoy. I think it sometimes gets categoirzed as psych-folk but I think that's a bit misleading, there are definitely folky elements and some psychedelic or at least proggy ones too but there are also some jazz influences and the whole thing has a definite downer vibe. At times it reminds me of Tim Buckley, although Whynott's vocals are not in the same league.

The record appears to tell the story of a trip across the US, but it's a pretty uneventful trip. Whynott goes a few places, meets a few people, and manages to sound wistful about it all. There's a girl in Rock Springs who sings, then some flying without a plane, then some other woman who reminds him of a lioness, and then a trip into the mountains while it's raining. The lyrics are kind of trippy and a little annoying, at times, because they don't seem to be really saying anything. However, the overall effect works--you come away feeling something listless and removed.

The record does feature tablas as well as some other odd percussion. It was issued on the Music is Medicine Label in 1977. I haven't been able to find out much about Whynott but he did record four albums after this one: Apology to the Animals, Calico, Geography & Lost Land. Some of these you can pick up on CD if you search for them. This album is also available at a reasonable price.

One note: I'm not sure if I correctly assigned the Gamelan interlude between tracks 4 & 5 on side A to the correct location (with track 4). The Gamelan sound seems to come in again in track 5 but the only silence I could find was between the Gamelan interlude and track 5. The music is encoded as high quality variable bit rate MP3s and the file includes my own crappy photos of front & back covers. You can get it here. (I'm trying massmirror one more time since they seem to be up again & all of my attempts to post on sharbee failed).

I will be posting again this month, as a regular blog reader Mark has made his recordings of the two albums by the group Pollution (featuring Dobie Gray and others) available. My next post after that will likely be a Jackie Washington album (Morning Song) followed by the sole Bermuda Jam album.
Posted by Max at 10:19 AM

I find that the artist's name fits this album completely. Thus far, I find it somewhat unnerving, but this could be because I haven't yet gotten my requisite caffeine fix for the day.

Thank you for sharing this oddity, Max!

FYI, Massmirror crashes Safari on Mac. At least it does for me.

For those having problems with MassMirror, here's the Rapidshare link:
http://rapidshare.com/files/144556280/Whynott.rar

have been looking for the first one for some time, looking forward to hearing that one and the stephen whynott also, thanks !!!

this album is perefect, im working on my blog coming soon i will post more albums about it, meant psychdelic folk and whatever

prefect album im working on my blog, coming soon i will post more albums about it, meant folk psychedelic etc

Excellent copy, Mox -- it's head-and-shoulders above my crummy mono recording of both albums.

If you're an audiophile such as I, you'll be somewhat disappointed in my "rip" of the *second* Pollution album (yes, there are three, actually....the first is entitled "Heir:Pollution", and I have also converted that digitally, as well....but it's only a slight improvement over the others), but if I know Max, he should be able to rectify the poor audio quality!

Thank you for your great work!

Discover the latest posts from your favorite music blogs at one place!!

Cannot wait for your posting of the Bermuda Jam LP. I swear I thought I was the only single person in the world who owned a copy of that record when I was a kid. Haven't heard it in literally decades!

Hi Fred,
I may have forgotten to let others know but I decided not to copy & post the Bermuda Jam because an excellent copy is already available on the Redtelephone66 blog: http://redtelephone66.blogspot.com/search?q=bermuda

Hi Max,
Thanks for posting this. I found this lp a couple of years ago and liked it from the get-go.

Tony Coulter at WFMU sad that he enjoys it and that it reminds him of D.R. Hooker, but to me it is more like the John St. Field (aka Jackie Leven) "Control" album, and that is not an album that has many kin... It has the same sense of being an audio travelogue of sorts containing highly personal songs about specific people and places, folk-rockish w/psych, prog and jazz touches, and a somewhat eccentric vocalist with a pretty elastic kind of register/delivery.

I just found another copy a couple of weeks ago (sealed) so any interested parties can get in touch with me if they wish.