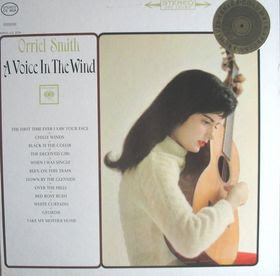 I've been particularly busy as of late, so this post comes a little later than I had promised. I hope you'll find that it's worth the wait. A Voice in the Wind is a pretty traditional folk album from a singer who is anything but traditional.
She is a classicaly trained singer whose mother sang opera. Grew up in Washington, DC living across from the Seeger family. Started performing folk songs at Gerde’s Folk City in NY when she was 18 and studying opera singing in the city, and managed to get on the Johnny Carson show (singing “The Russian Nightingale”) before she had a recording contract, which got her signed to Columbia to record this LP and some tracks on a couple of Columbia's All-Star Hootenanny compilations. After that moved on to the Jimmy Joyce Singers and a recording with Ray Conniff live in Japan. She did a fantastic single with Phillip Lambro (Tiffany Glass b/w Winds of Space) that is available on the Fuzzy Felt Folk compilation (highly recommended) and sang on Lambro's soundtrack to Crypt of the Living Dead (also available on CD). Nowadays she performs opera arias while clucking like a chicken, which you do have to hear to believe (my description can't do it justice). Thankfully both The World's Favorite Cluckoratura Arias & Live! From CarnEGGy Hall are available on CD.
On this record she performs largely unaccompanied by her own guitar and occassionally strings under the direction of Walter Raim. The record was produced by Bobby Scott, who helped her select the material (a nice mix of British and American ballads, for the most part).
You can review her full discography here. And read an excellent interview, from Terrascope, here. There are also a couple of poor quality videos from her folk-singing days out on Youtube here and here.
These MP3s (also available here) of the album come from the mono version. Here's the tracklist:
Side A
1. The Deceived Girl
2. Down By The Glenside
3. When I Was Single
4. Over The Hills
5. Been On This Train
6. White Curtains
Side B
7. Black Is The Color
8. Chilly Winds
9. Take My Mother Home
10. Geordie
11. The First Time Ever I Saw Your Face
12. Red Rosy Bush
Coming sometime next month: A Revolutionary Revelation by the Musical Theatre.
Posted by Max at 10:39 AM

Thank you so much for posting this. I loved her tracks on Fuzzy Felt Folk, looking forward to this.

FYI, the rapidshare link is dead already (they're only good for ten downloads).

Thanks for the heads up on the rapidshare link. Mediafire was down when I created this post but I will also post the file there in the near future.

Having listened to this, just wanted to thank you again. The version of "Geordie" is really different and beautiful.

Hi. My old blog was shut down last night (chrisgoesrock's). I have open a new blog: http://chrisgoesrock-blog.blogspot.com . Please help me to add my blog to your blog and to your blogfriends

I downloaded this album a few weeks back. She has such beautiful voice. Thanks for sharing.

Thank you so much for this amazing album!

I just bought a sealed copy of this on Ebay. I think it is a reissue from the 70s perhaps. Once I opened it, there was a record by a totally different artist inside. It's another Columbia LP with a serial number that is not far off. I just wanted to warn people to be careful if you come across a sealed copy, in case there was a batch of them that were packed with the wrong record!

Lucky for you you have the mono version. I'm spinning the stereo version that I just picked up at the flea market. The stereo mix sucks. No middle.