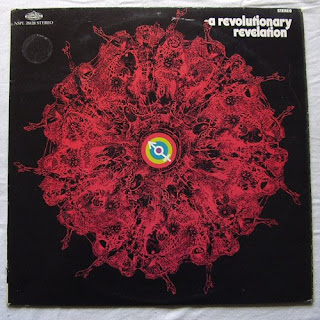 The 1960's (and yes 1970 is part of the 1960's) produced plenty of weird records and plenty of cheesy records, but those musical excursions that combine the weird & cheesy are a rarer lot. This is certainly one of them. So what is the record about? Well according to thel liner notes, "This album attempts to explain in musical form, not only what the youth of today are against but also what they are for....It is a musical expression against the war, racism, violence, poverty, the destruction of our natural environment, inequality, puritanism, and the imbalance of power." Now listening to it for the first time you might miss this. You might mistakenly believe that the record was made to cash in on disgruntled youth who might be fooled into thinking this album expresses their concerns, such as their desire for a "love pill" and their belief that a lack of compassion for minority groups caused Lee Harvey Oswald to become an assassin. And so you might think that what you're hearing is the counterculture filtered through the psyche of an aging, pseudo-hipster, record producer who assumes the voice of a nameless, all-wise, Socratic questioner. But you'd obviously be wrong, or maybe not. It is really difficult to capture the weirdness of this one in a couple paragraphs, so you should really listen to it yourself and decide how serious of a piece of musical theater (I'm sorry, theatre) this is.

Admist all this weirdness and between the spoken word exchanges, there are some pretty cool songs here. Computer World is probably my favorite (sort of a watered down version of Lothar & the Hand People's "Machines") and the Lee Harvey Oswald montage, Reflections in the Life of an Assassin is pretty cool too. The band, made up of some competent session musicians plays it with a straight face (although not as straight as the Mystical Voice & the Revolutionists). Here's the personnel listed on the record:

Jay Darrow is the main instigator of this fantastic excursion into teen angst & desire. In addition to writing the script he's cowriter on most of the songs (in most cases along with G. Shayne). I don't know much about him, though, other than the fact that he is also listed as a producer on a number of pop/rock singles during the late 60s by bands like the Harbingers, the Plebian Rebellion, & that counter-culture icon Anita Bryant.

Because the spoken interludes fill up the space between the songs I have not seperated the tracks the way I usually do. Also, this is still a pretty noisy recording and my attempts at noise reduction don't seem to have worked as well as they usually do. Unforunately I think this is because my crappy turntable has gotten crappier. I'm going to try to get a new stylus sometime soon, which will hopefully help. I hope you enjoy this weirdness released in 1970 on the Metromedia label.

And here's the tracklist:

Thanks Max, yet another obscure gem! This one is like a poor man's "HAIR". A great period piece, if you can cope with the annoying sixties teen philosophy between the tracks.

Thanks for this rare album!
Your comment made me curious!
Keep up the good work!

Hi again. My new site: http://chrisgoesrock.ucoz.com/ . See you all in there. //ChrisGoesRock

hello friends, for reasons beyond .El Camaleon change the url.

a hug to all

Finally got to listen to this it is great thanks

I liked the write up you gave this little gem here....nice to find something obscure and interesting to listen to in this day and age....much appreciated...thank you.

This is exactly why I spend hours trawling through music blogs because once in a while an absolute rare gem of an album appears that I had no idea ever existed! Thanks so much for sharing this with the world, especially given the fact I can never see this making a CD re-issue (unless someone comes across the master tapes in a dark cellar or garage sale that is...and if they do let me know, damn I would release it!)
Thanks again for sharing such amazing material and being one of those rare gems yourself: an original music blog!

whitepunksondope says it exactly as it is - max hits the spot again!

This looks right up my alley Max, thanks.

A couple of things...
I wanted to give you my new address for your blogroll. Willard's Wormholes is finally off the Google/Blogspot grid, with a new domain...

Also...
You don't still happen to have the JP Rags album, do you? I downloaded it from you back in the day but it seems to have vanished, and all the links have since died.

Hi Willard,
Will update your link and repost the JP Rags by the end of the weekend.

You're the best, Max. Just grabbed it. Thanks for everything. You're posts are getting weirder and weirder.
W

NO,NO,NO what happens to the World???
1970 is the first year of the Seventies. The decades start up from (0) ZERO no (1)ONE. Please wake up friend. Jesus-Christ was born four or seven years before the official date admitted I invite you to investigate this. Finally I write to you the years of eighth decade of the twentieth Century:
1970,1971,1972,1973,1974,1975,1976
1977,1978 and finally 1979.
I hope you can understand this and don't spread to your visitants the horrible mistake of this twenty-first Century.
Lover of the TRUST.