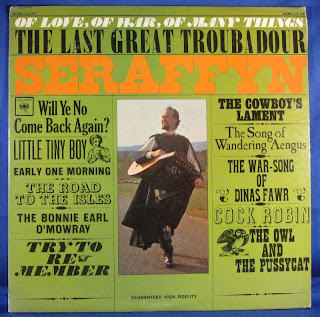 Seraffyn (last name Mork) is, according to his record cover, the "last, great troubador." Now he is certainly not the last, and is greatness is arguable (although the album is entertaining enough), but he certainly seems to have been a troubadour, and a wandering one at that (again according to the record cover). He also was born & raised in New England (not Old Scotland), graduated from Harvard and the Royal Academy of Dramatic Arts, and in 1953 won the Folksong Award at the International Eisteddford in Wales.


Seraffyn does a fine job at singing and occassionally speaking his way through some good folk material, an Edward Lear poem, and a song from the Fantasticks (i.e., Early One Morning). Most of the material, though, is British (as from the British Isles) with some particularly stirring tracks on the first side. A few of the selections, particularly the version of the Owl & the Pussycat (a guy has a romantic dinner and sings to his girlfriend, "What a beautiful pussy you are? WTF?) fall short of the standard set by the first few tracks and seem a bit silly by comparison. Still the record is a notch above your average folk record from the period and one has to wonder what happened to Seraffyn, who does not appear to have released anything after this.


Here's the tracklist
SIDE A
1. The War Song of Dinas Fawr (Men of Harleach)
2. Will Ye No Come Back Again
3. The Bonnie Earl O'Mowry
4. The Song of Wandering Aengus
5. Try to Remember
6. Early One Morning
SIDE B
7. The Road to the Isles
8. Little Tiny Boy
9. The Cowboy's Lament
10. The Owl and the Pussycat
11. Cock Robin


The recording is in mono & the MP3s are encoded with a high quality VBR. Unfortunately there are a couple brief skips (covered over as best I could) on the track "Little Tiny Boy." Listen here or here.
Posted by Max at 10:14 AM

Well, as you said his greatness could be questionable, but still an interesting post. Thanks

please add my site to your blogroll again ... would be highly appreciated.

Thanks a bunch & See ya,

I don't believe the link to your blog was ever removed. It's certainly there now.

Many thanks - have been looking for this for a couple of years.

Thanx max, never heard of this, very good record.
one request please: len chandler to be a man from 1967, is it possible to post it?
thanx

Both Len Chandler records should be up by next week at the latest. Glad you liked this one.

Wow Max you are my hero! I will stay away til then, thanx so much

Seraffyn also studied at Old Vic's Theater in England, whence came a number of world class performers (i.e. Sir Laurence Olivier, Sir Alec Guinness.) He traveled Europe and the isles frequently as a troubadour, staying in all kinds of lodgings from barns to kings castles. He wrote of his travels for several publications. When you listen to his treatment, imagine him performing impromptu in a tavern or pub for his room & board, or by invitation in a Castle hall.
We lost Seraffyn in an automobile accident in Florida. He was struck head-on by a drunk driver who lost control of his car and crossed the highway median. He and his producer were on their way to NYC together to start work on his second album. The producer survived.

Serrafyn was killed in an automobile accident in South Carolina after leaving Savannah, GA some time in the mid to late 60's. He was driving a Corvette.

I found the NYTime report of his death. It was indeed in S.C. Hardeeville, 24 April 1964. The NYTimes reports he was wearing his troubador dress at the time.

Here is a bit of Seraffyn live! He apparently filmed a Christmas-themed promo video for an Inn in Massachusetts.

THANKS FOR THE DOWNLOAD MAX. BEEN LOOKING FOR THIS ONE FOR A WHILE.

Seraffyn (Donald Mork) was my uncle. I posted that YouTube clip.

I have a number of unreleased recordings he made; would like some day to find a way to make them public. His story needs to be told.

I have treasured my copy of "Of Love, of War..." for more than 40 years. I would love to hear any material you have and would support any effort to publish the recordings.

As to Seraphin, I did know him for a brief time in Coconut Grove, Fla. He came down to do a gig at a coffee house there. His record was just released. He stayed long enough to get one of my friends pregnant, he might not have known, but was off to New England again. On the way home he was killed in a car crash. That's why you've heard no more from him. He stayed in character 24-7. His lute was named Gretchen. Jan

I had the pleasure of seeing Seraffyn Mork perform at our school (Seton Hall Prep, S Orange NJ) in 1963. The whole traveling minstrel thing certainly appealed to me then, still does. I recall him saying he was on his way to CT and off he drove in, as I recall, a rather modest set of wheels. So we beat on, Mr Mork, each to our own CT.

I went with my brother to Bimini in April 1964 during spring break. It was a paradise of colors. We stayed on the North beach that night. The next day we met a couple from Cocoa Beach FL(Chuck and Jane Norton) who had a sailboat and they asked us to crew for them, and then told us we could have anything on the boat we wanted. So, while in an alcohol-besotted haze, I was totally amazed to see Chuck come back to the boat around 6 PM with a guy who looked just like a 15th century minstrel (!). That, of course, was Seraffyn (Mork), and that is exactly what he did for a living. He went around singing songs and freeloading off everybody, because nobody could resist putting him up for the night or buying him dinner. I have had this album now for 47 years with a picture I took of him taped to it. An amazing character. The instrument that he played was a lute, just like in the old days. We all went across the Gulf Stream to Bahia Mar yacht club in Fort Lauderdale. I didn't know about the South Carolina accident, because Jane told me that soon after being with us, he was killed while riding in a taxi. He was a truly amazing character. His parents (Raymond was his father) wrote everybody they could, asking for reminiscences, and of course we wrote them ours. Brant Watson

Peter Mork again. "Jan", if you see this - you're killing me! What happened to your pregnant friend?

Thank you for posting a link to the music. Fun stuff to check out. Especially like Cowboy's Lament!

We loved his singing so much, we named our 24'4' sailing cutter Seraffyn. My husband has welsh background so it seemed fitting. That little boat took us around the world and became quite a famous charactor itself. You can read more about Seraffyn the little sailing cutter at www.landlpardey.com

So glad to find this site and listen to his voice again.

Might have been mentioned above ... the song covered on "Of Love, of War ..." from "The Fantasticks" was not "Early One Morning" but "Try to Remember." A folksinger friend introduced me to Seraffyn's recording and his work 50 years ago this past winter, and I've treasured my copy of the record ever since. Good to see a few others feel the same.

BTW, I just moved and was looking this afternoon at the last half-box of LPs (about one-tenth of the original amount) and saw that my Seraffyn recording is among the survivors. Think I'll keep hanging on to it.