Len Chandler - To Be a Man & The Lovin' People 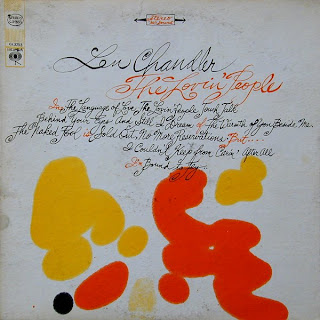 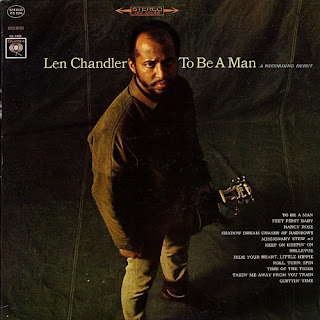 It's been a while, but to make up for the delay I'm posting 2 albums, both by Len Chandler and both released in 1967. They're also the only 2 albums he released under his own name. To Be a Man is my own recording but I have to thank blog reader Markus (for forwarding the other album to me) and his friend Steve for recording it.
Chandler was one of a number of African-American folk singers/songwriters who were performing during the 1960s, but with the exception of Richie Havens most of them aren't that well known today. Chandler was a classically trained musician (oboe was his first instrument) who didn't get interested in folk singing until he was in college. His first performance of folk songs were actually sung with the New Jersey Symphony Orchestra (he performed "Black Is the Color of My True Love's Hair" and "Wayfaring Stranger"). He started writing songs for Broadside and got involved in the Civil Rights Movement, and then got a record deal with Columbia. Among his compositions was the godawful novelty number "Beans in My Ears" as well as some songs written in support of the Black Panther Party. (You can check his full discography here, but other than a later e.p. and his work on the Credibility Gap comedy album, it doesn't go much beyond these 2 releases). He seems to have focused more on songwriting during the 1970s, and was a founder of the Alternative Chorus-Songwriters Showcase. He also moved to LA.

Of these 2 albums, To Be a Man, is the first and (to my ears) weaker of the two. It's a more traditional folk album, featuring him and his guitar, but is perhaps too traditional, and while I don't believe he cops any of the riffs here it does sound like a lot of other records you may have heard before. Chandler's faults as a perfomer are also more glaring--his vocals are often too formal and I, for one, wish he would loosen up a little (as he does sometimes on the other release). His guitar playing is fine but not exceptional, and his songs are also a bit generic at times. He's at his best here on bluesy, uptempo numbers like "Feet First Baby" (about an ornery natural-born fighter) and on the satirical "Hide Your Heart, Little Hippie.” When he tries to be poetic he meanders and the results are kind of confusing (as on “Shadow Dream Chaser Of Rainbows” which goes from images of “moths deep inside [him]” and the “fires [he's] been drawn to, to learn” to people following rainbows for an imaginary pot of gold, which really isn’t as valuable as a shadow because soulless people have no shadows, or something to that effect.


On The Lovin’ People, he has the benefit of a good backing band consisting of Pretty Purdie on drums, Artie Butler on organ & piano, and Joe Mack and Bill Salter on bass. The band, who play both loose and funky without ever sounding sloppy, helped produce a more laid back vibe and Chandler sounds more relaxed than he did on the earlier album. He has some better songs on this one, too, such as the title cut warm, poppy number about...well, “Lovin’ People,” on which the presence of a chorus (made up on the spot of people who had gathered to provide assistance to a mothers’ help organization) also helps temper Chandler’s unfortunate tendency towards over-earnestness. “The Naked Fool” is about a relationship gone bad, which doesn’t have anything new to say but will have a few toes tapping. “Sold Out, No More Reservations” is an interesting number about a male groupie, and “Bound to Fly” has a nice soaring quality, and Chandler’s lyrics and delivery mesh well on it. If anything the problem here is that Chandler is sometimes eclipsed by his backing band—check “Behind Your Eyes” where the band goes off on some nice free jazz-psychedelic tangents while Chandler seems to be trying to channel Sammy Davis, Jr.

Here's the tracklist for To Be a Man

To Be a Man was transferred from a mono copy of the album and the Lovin' People (apparently) from a stereo copy (at least the MP3s are encoded in stereo). The first album is encoded at VBR-extreme and the 2nd at 192k, and I've made available as one DL HERE. I hope you'll enjoy them.

Hi Max
My first ever download, was William B Strickland from your blog. I have visited your new postings and always find them interesting.

Today you have made me very happy. I have been looking for 'To Be A Man' with no success and now thanks to you Max for I can hear Len's voice again.

"Keep on Keeping On" has been my mantra since away back when even though I have adapted it on my retirement to: "Keep on....till you need to change direction."

I am also looking very much forward to hearing The Lovin' People.

Keep up the good work Max and don't pressurise yourself by worrying about 'how many postings' rather do what you do best, worry about 'the quality of the postings".

Regards from Cy in Portknockie

A post doesn't get any better than this. Thank You!

incredible post, only Feet First Baby is corrupted, but anyway if you can post it be very grateful
thanks for all the dedication and good luck

Glad people are enjoying this & sorry about the problem with Feet First Baby (my favorite track on that album)--the problem seems to have occurred when I converted the file to MP3 so I tried it with a different program. Here's the corrected file (I'll try to correct the whole file later):
http://www.mediafire.com/?yn11eywzodm

I have never before heard of him, but this is a great find, downloaded it because of your post, thanks a lot, very fine stuff here

great blog...you mentioned you were going to post angel angel we go down soundtrack but that it had already been posted...unfortunately that sites link has gone...is there any chance of you posting this soundtrack...please

I'll have to dig that soudtrack up again--I lost my recording of it when I lost my hard drive some time back, but I'll try to post it in a couple months.

Analyze all you want, but when I first heard Len Chandler at the Fox Hollow Festival in the mid 60's, I fell in love with his buttery, smooth voice. I still have the "To Be A Man" LP and just today was wondering if he was still performing (there are so few from that time that are very well known anymore). Glad I found your website.

Hi Max - Just discovered your blog. I used to listen to Len Chandler in the late-50s at the Cup of Socrates, a coffee house in Detroit. Haven't heard his albums since I lost them to my ex-wife in a divorce 30 years ago. Would love to get these albums but they are no longer on r-share or m-upload. Might you be able to upload them again? Please email me at sstahl@solutiond.com. Super great thanks!! Cheers - Stan

Max - Great Thanks for reposting. This music took me back to the days of my youth. Greatly appreciated.

Max -
Thank you SO much! I have been longing for and searching for To Be A Man for years! The first cut is a recurring shower song of mine, but I'd forgotten how much I love the whole album. And now I love you!
Thank you, thank you, thank you! More than you will ever know!!
LN

Been looking for Len Chandler albums for years!!! Now I can't work out how to download them....please someone help me....thanks a million Max for your uploads.

What a joy to hear Len Chandler again! Thanks. So what ever happened to this great poet, singer, song-writer and socially committed artist? What crazy circumstances ended his brilliant recording career? Len, if you read this, thanks for the music, the great film "FTA" and all your contributions.