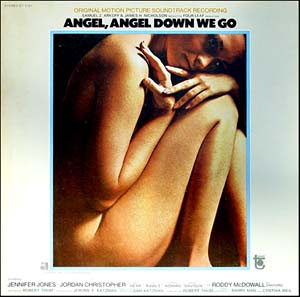 Well, as you may have guessed I'm not posting the Hoover album I promised last time--it turns out it's already available on the excellent PUZZLEDOYSTER blog and I suggest you go over there and grab it ASAP.

Instead, I'm filling a request for an album I didn't post before because it had been available elsewhere--in this case on the 7 Black Notes blog, which unfortunately is no longer active. Since I lost my own recording of this when my hard drive crashed a while back, I am reposting the recording that appeared on 7 Black Notes.

So what about Angel, Angel Down We Go? Well if you're interested in the movie (starring Jennifer Jones and Roddy McDowall, as well as featuring Lou Rawls and Holly Near) I suggest you check out IMDB's page on it. Or check out the trailer. The soundtrack, which may or may include all the music from the film (I have to confess to never having seen the movie) features music by Barry Mann, composed sans songwriter partner, wife and lyricist Cynthia Weil. Mann has co-writing credits for many memorable songs. If you're not familiar, check the Mann & Weil web site. Mann's soundtrack credits are perhaps not as impressive--although the duo did pen most of the music for the classic teen-exploitation flick, Wild in the Streets (a personal favorite).

So I hope you enjoy this soundtrack of groovy music and wacked-out dialogue from a weird and apparently pretty awful 60s flick available here or here.

I'm not certain what I'll be posting next but upcoming posts will include Len Novy, Casey Anderson, Line Renaud, Randy Holland, Rabbi Abraham Feinberg, Florence Warner, and Pete Fountain (I got about 20 of his records at the thrift store recently). Stay tuned.

I lost my copy the same way you did... thanks for the opportunity to get it back!

i requested this thnks so much (gregw)

Thanks Max, another rare and unusual one. Keep up the good work.

Hello my friend.
Your blog is very good and admired by us.
We also have a blog (www.lagrimapsicodelica.blogspot.com) for four years, with 9000 hits daily.
And recently, we opened an online radio station, called Radio Web Lágrima Psicodélica Underground, which is broadcasting the rock and roll, 24 hours / day.
So we're inviting her to join us in the transmission of our radio website.
If interested in our radio broadcast, I ask that you contact us via email lagrimapsicodelica@gmail.com.

The link below is a description of the partnership between the radio, blogs and websites.

If you wish to place the link and the player of Radio, consult the following link:

thanks a lot, a real hidden treasure!!

thanks for this one man...always a joy to visit your site

mza-acid is not longer live

Ohh wow! Never knew there was an LP for this exploitation flick! Thanks!

Fantastic - was just blogging about this! Love it.

hi, thanks for complimenting my blog, I can only say your's exceptional !

Been searching for this soundtrack for years. The link over at 7 Black Notes was inactive for some time, so never had a chance to grab it from there. Thanx for re-uploading!