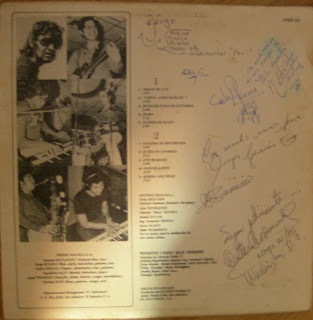 Something different this time. I don't know much about the band or the record, and would probably never have heard it if it hadn't been for the anonymous person up the street who through away a nice little collection of Central and South American lps from the 1970s (thanks, whoever you are). A number of the LPs are pretty cool Latin rock, but many have been reissued in their home countries. That doesn't seem to be the case with this one by Fiebre Amarilla (yellow fever, in English).

Fiebre Amarilla is from El Salvador and is still performing today, but from what I can tell (see Youtube videos below) they've evolved into a more staightforward Latin/Salsa outfit, although still quite good. On this, which I suspect is their 1st album (it's at least self-titled) they perform in a wider variety of styles. In addition to some salsa (including a Joe Cuba cover), you can hear some stone cold funk (check their version of the Beatles' "I Gotta Feeling"), some boogie-rock (check "You'll Belong to Me"), and even a bit of prog-rock ("Introduction"). The band is talented and they some nice vocal harmonies. Songs are in Spanish and English. The whole is a varied and quite tasty release.

Whoever left the album for me didn't place it in the correct sleeve, so I have no cover images for this LP. The picture above is from the sleeve in which I found the record, but is another Fiebre Amarilla album. You can, however, see the band as well as their autographs.

Give a listen here.

Here you can check out a couple more recent performances from the group:

max, can you help me out?

I remember a long time ago I found a site linked here that had all this crazy psych australian rock bands from the 70's, but I can't find it anymore! do you remember its name? or someone who reads this!

And I really like your blog. keep it up!

The best source for 60s & 70s Australian music is http://www.midoztouch.com/

Check both their board and their "resources."

great blog! been a fan for awhile, have you on my blogroll, thx!

You can do it from this link to the contest page:

I commented that there are no restrictions regarding age, gender or nationality.

Just put your e-mail, wait for the confirmation email, confirm and ready. It's something really fast

(If in case you do not find the confirmation message in your inbox, look in the Spam folder).

The blog is perhaps the only one in the contest that is dedicated to promoting and spreading on these genres.

PS: Do not forget to pass the word to your friends. And if you have more than one email you can re-vote. Sorry for writing here, but I have your email to send it privately.

Hey, Max, Thanks for including the Fiebre Amarilla album! I am from El Salvador and, was very greatfully surprised to find this album in yor blog. And yeeeeeeees, you´re rigth: La Fiebre (as it is so-called)is still at large. They keep playing on concerts. They all call themselves "La Vieja Fiebre" (The Yellow Fever Old Members)They all are a unique band with a wide variety of styles. Thanks for sharing all the music memories.

Thanks for sharing this.

Excuse the comment clutter...
Wanted to let you know that we were zapped by The Man, but were back with a new home. If you could update/include us in your links, it would be greatly appreciated.

NEVER GET OUT OF THE BOAT (REDUX)
http://nevergetoutoftheboat-redux.blogspot.com/

All the best,
W

I used to follow the band Fiebra Amarilla in the DC, Maryland, Virginia area back in the late
70's/early 80s. I dated the bass guitar player and my friend dated the lead singer. It was lots of fun. They were a great group and no one can match their talent. They were all married and all screwed around behind their wives' backs, though, as most Latinos do. We loved their music, though.

ey max thanks for posting my favorite band from el salvador,,,fiebre amarilla,,,they are still doing concerts in el salvador,,the lead singers that they had in the 70's and 80's they live in USA. mangandy and the other guy that appear in the first video you have posted in this blog,,both of them have their own band and are still singing here in USA,,,,what a waste of talents,nobody knows about those two talented singers what they are doing here in gringolandia and we still miss and sing their good music, thay deserve something better then being two don nadies aqui en la usa,,,,,,,,eso es verga ijos de puta!!!!!

My uncle played in Fiebre Amarilla in the '70s and in fact, he's the keyboard player in the image that you have posted above.

I was just discussing his band a couple of weekends back at a family gathering and he happened to mention that he had a few lps and even a music video or two in his possession!

He promised he'd let me get my hands on this material soon. I'll probably post them somewhere and I'll be sure to let you know.

Thanks so much for sharing this!

Thank you, Max, I never thought I'd find this album in your blog. And I'm surprised the way found it. In El Salvador they were one of the best groups of the 70s... and they're still around. I was looking for their biography and I found this: something better; this means a la to me. Thanks a lot. I appreciate what you've done.

I have a collection of Latin music from this time that I am listing on ebayclassifieds.com in D.C. I have the album that you have the back from; it's cover is white with "La Fiebre" in yellow at the top, nothing else. Inside there is an insert of the group in color that was signed by them to me at a concert here at RFK Stadium. Also, have RARE album by Jose,Jose(Sosa), 1969! Several other, too. Enjoyed reading your comments as my favorite music is Latin and I'm a Gringo from California and Texas. Thanks!

I'm Scottish and one of my relatives is married to the son of the lead singer of Fiebre Amarilla. He says it's quite difficult to track down copies of the LP. I'll have to tell him about this blog.