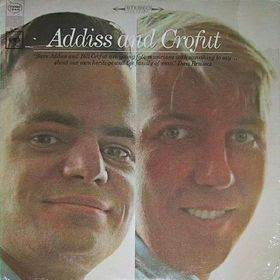 Here's another in my sporadic posts, and one I have mixed feelings about. Addiss and Crofut were certainly versatile and ahead of their time in their multicultural approach to folk music, but they often strike me as bland and somewhat emotionless. Still the album has its moments, Sita Ram's raga-folk sound is quite pleasing, for instance, and they have the good sense to cover a Fred Neil song.

The duo seemed to have played a lot of college campuses in the early/mid 60s (according to my google search) and had a gig touring the world on a State Department junket. According to a 1963 press release, Robert Kennedy singled them out for praise. So they were performing a while before they released this, their first album. A 2nd album, Eastern Ferris Wheel, is their best release to my ear and can be heard on the Record Fiend blog. Bill Crofut passed away in the late 1980s but Addiss appears to still be around, although I'm not sure what, if any, involvement he still has in music.

Anyway, it's late so I won't ramble. Here's the tracklist
A1 Simple Gifts
A2 War of Words
A3 Innsbruch
A4 Malaysian Flute
A5 Sita Ram
A6 Blues on the Ceiling
B1 A Ballad from Vietnam
B2 I Sing of a Maiden
B3 Non norbis, Domine
B4 To Have a Wife
B5 Mail Myself to You
B6 Crusader's Song (pts. 1 &2)
B7 Joys of Love (Plaisir d'Amour)

I did recently record a few records to my computer, and while it takes a bit of time to clean them up and get them ready for posting there will be more posts coming including Nils-Aslak Valkeapaa, Vida E Inspiracion, John & Anne Ryder & Elmerlee Thomas).
Posted by Max at 7:53 PM

Love the blog!
...would like to invite you and your followers to visit "A Party In Suburbia"...
...please be our guest and enjoy meticulous rips of the very finest in vintage LP's...

Thank you for this rare album!

Hi What a pleasant surprpise to see Randy's record on your site I sang the background vocals for him the studio named me The Bound Brook choir My record release at that time was written by Lew two country songs :before You See Your Mommy Cry and Where Are You I sang under the name Jenny Hastings I am now a songwriter\ singer my CD is on CD Baby title Stella Ann easy listening

My records are in storage, but I seem to recall an album of theirs that had a song called "Newspaper Men Meet Such Interesting People". Since that's apparently not on this one, I guess I have a fairly rare LP. In fact I have a vague memory now of the LP possibly having been called "Such Interesting People" or something like that. I'll have to dig that out someday and rip it to my computer.

Hi, I came across your site and wasn’t able to get an email address to contact you about a broken link on your site. Please email me back and I would be happy to point them out to you.

Here they are on Pete Seeger's TV show - https://www.youtube.com/watch?v=EbZsgiY5O4w

Thanks for sharing!I like this!I heard good samples to these tracks, i left link here - www.lucidsamples.com