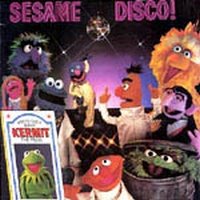 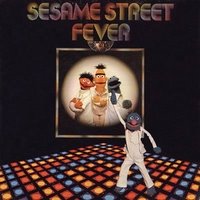 This post if a first for me in a number of ways. It's my first request (from my lovely wife). It's the first time I've posted 2 albums at once. It's the first (and second) time I've posted records that weren't my rip (thanks to the anonymous newsgroup poster). It's the 1st post performed by celebrities. The 1st post performed by puppets (or muppets to be more exact). I could go on. All that said, these are 2 albums that should never have been allowed to go out-of-print even if disco is dead (and I'm pretty sure it isn't, it was just sleeping).

First let me say that these records do not represent some celebrity attempt to cash in on the latest popular culture trend. The muppets were made to disco. Offstage (and sometimes on) they embraced a hedonistic, devil-may-care attitude that said dance the night away and worry about tomorrow when it comes (just be careful you don't drop your cookie). And as Eugene Chadbourne said in his Sesame Street Disco review on All Music Guide, "Nobody looks better in disco duds than Bert and Grover..."

Sesame Street Fever, the first Muppet disco album, was released in 1978 by the Children's Television Workship. The LA weekly says it had "the best album cover ever" and they may be right. Robin Gibb of the Bee Gees guest stars but to me Cookie Monster is the real star (on both of these albums). The 2nd record Sesame Street Disco came in 1979 and may be even better than the 1st (although the cover isn't as good)--it certainly features the best song here, Me Lost Me Cookie At The Disco. It's more poignant than any song of lost love when Cookie Monster sings "Me lost me cookie at the disco...Me lost me cookie to the boogie music."

Here's the tracklists for the 2 records:

If you're interested in seeing the rest of the Sesame Street discography go here. This discography doesn't mention any CD releases for these 2 records but I read one site that claims there was a Sesame Street Disco CD--I haven't been able to find one for sale though (perhaps it was a bootleg). If this was the case, though, I can pull down that release since I've posted the 2 lps seperately (& not on Sendspace this time). Here's Sesame Street Fever and Sesame Street Disco. I almost forgot, if you want to see Kermit's video for Disco Frog it's available on Youtube here.

Next week a return to more usual fare with David Stoughton's Transformer album. After that, a few weeks vacation to be followed by some more great music.
Posted by Max at 6:51 PM

looks like sesame street disco is no more available at the link...me want the boogie music

Well if someone asked me I'd be happy to take it down but since they didn't I reposted it (at Sendspace this time). Boogie on brother/sister.

Megaupload works fine for me ...thanks love this stuff :)
BTW When signed in you can now access my opera blog , sorry bout that
Gary

this looks quite intersting
thanks

I can't get the Sesame Street Disco show up....Can you repost it. I have a sister that has been looking for this for years...and I would really love to have these songs. KB

Hi Kathy,
Both of the links are working for me. Perhaps the site was temporarily down. For the Sesame St. Disco you need to scroll to the bottom of the page (sometimes after clicking "skip this ad" on the initial page).
Max

I am another person who cannot get the Sesame Street Disco link to show up (the fever one on Megaupload worked just fine and I am grooving to it as we speak!). All I get is the massmirror main page with no extra information and/or links and no side bar to scroll up, down or sideways! Maybe it is a country thing? I am in the UK and maybe the other people who could not get it were elsewhere, its a stab in the dark but it is strange that some can get it fine and others not.
As a side note, I have a feeling that the legendary DJ/producer Larry Levan was responsible for the whole album music wise, I have an MP3 of a 12 inch mix he did for the cookie song and while I am extrapolating slightly, it does have his trademark production throughout the music.

I'll try to get a repost up later this week. I think massmirror is kaput.

Thanks for the offer of a 'Sesame Disco' repost, I appreciate it isn't as easy as just a mouse click and a tap with a magic wand (as I think some people presume when they make such a request) and even if it doesn't take that long..it still takes!
Anyway, will look in next week and btw: You sir, are a star!

Sorry it took me so long to repost--sort of forgot I was going to do it--but Sesame Street Disco is now up.