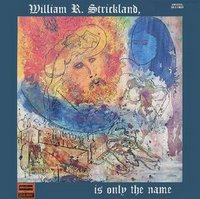 William R. Strickland is the name of the singer-songwriter-performer who put out this odd record on London/Deram records back in 1969. He plays guitar, sometimes accompanied by the London Philharmonic, and sings about World War 3 (1/2) and computer love (long before internet dating). I guess you would call him a folk singer--he certainly has the Dylan-style sneer down--but the general weirdness of the songs (which he says were largely improvised) lends a certain psychedelic quality to the whole affair. I guess if I had to suggest a point of comparison (and an obscure one at that) I'd say he reminds me of Peter Grudzien without the gay subtext and with a wider range of instruments (there's even a Jew's harp on one track). There is a recent article about him online from the Santa Cruz Sentinal that refers to an older (1976) review that said he was like "a kinky cross between Mark Twain and Lenny Bruce" and that Strickland calls himself "a mix of Willie Nelson and Pink Floyd." Strickland is still performing and you can even hear a recent (March 8, 2006) radio performance and interview on KUSP by him online.

Ohshare only seems to work in Internet Explorer. If you use Firefox, you need the IE Tab extension.

This is a fantastic album and got a bit creepy when I listened to it in the middle of the night.
Thank you very much for sharing.

Hi Max, my name is christian, from argentina, i just want to say that this record is awesome, still when i was lookiin for some other new acid folk songwriter this appear, God bless this guy, great work...and thanks for your work of upload too, here's my mail and i have my space too.
experimentalchristianmusi@yahoo.com
myspace.com/experimentalchristianmusik
merry christmas.

PD: i'm looking for these 3 records but they are impossible to find :
jerry porter - don't bother me
bernard backman - portrait of man
mel lyman - american avatar

do you if i can get them on some blog?

I've got this record was on a list of oddities ; at last, I could listen to this very strange record : thanks.

Hi Paul,
I'll have it reposted by the end of the week.
Max

Thanks a lot !!! this is a wonderful blog.

I bought this album when it first came out based on the sampler "Wowie Zowie - A World of Progressive Rock" (or something like that).

Will is still performing but never comes to England; a crying shame 'cos I for one would snap up tickets immediately.

This takes me back many years and is still the first album I play wehn I connect my turntable to the PC.

Thanks for posting the RAR old chap, it is much appreciated.

You are indeed a deep well whose shining surface I have only just begun to see. Your currents do run deep.

Having already told you; we love U at Sarg Maj's and plan to see and hear U at Piper's bar Sept. 19th.

Im the same as trance dylan...heard it on the compilation but for the life of me....couldnt recognise the track it was....but it always struck me as different so...thanks for letting me try it out again....much obliged.