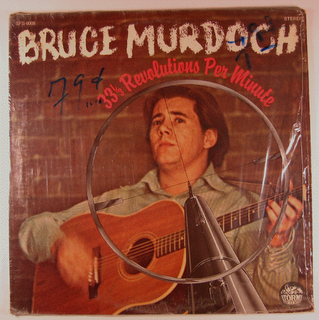 I didn't want to go another week without a post but haven't had time to rip anything new, so here is a rip of a fairly obscure piece of vinyl that I grabbed off a newsgroup (thanks to the original poster). It's ripped at 320k but doesn't appear to have any noise reduction so you may a few pops or clicks.

Now about the music and the musician, Bruce Murdoch was a Canadian folk singer from Quebec originally who released 2 albums (that I know of) as well as appearing on Elektra's Singer Songwriter Project compilation (which you can pick up on a CD combined with a David Blue album). He apparently taught a lit. course at McGill at one point and later became a high school principal in Alberta.

Richie Havens heard him performing in Canada and signed him to his Stormy Forest and then proceeded to record and poorly produce this, his first lp. The production is pretty poor and on another Web site Murdoch himself wrote, "the album isn't very good. It has many songs on it I still like, but the production wasn't up to par." Everything sounds a bit tinny and at times I'm not sure whether there is a harpsichord playing or a piano. Still it has some excellent songs, and Murdoch's lyrics and passionate vocal delivery make it worth a listen. The album largely features angry political songs and sometimes angry love songs. Some weird touches, like the Hitler speech and war sound fx at the start of "Mary You Are My Friend," are also interesting and the lyrics, like that song's message about fascism in the corridors of power, remains pertinent today.

Murdoch released a 2nd album, eponymously titled, on the Radio Canada International label in 1980--I haven't heard it but the couple of mentions I found on the Web suggest it is better than this one (and I like this one, production aside, quite a bit). I hope you'll like it to.

Also, a quick note on my links. I realize there are a number of dead ones and a number if new ones I'd like to add. Hopefully I'll find time to do that over the next couple weeks.
Posted by Max at 1:43 PM

Thanx for your music, ciao

Great!
Thanks a lot!!

thank you for the fabulous blog!
I just discovered your blog and there's a lot of cool records here.
Unfortunately,
Bruce Murdoch - 33 1/3 Revolutions Per Minute (1971)

post seems to be down--any chance for a reup?
Thanx again!
Greets From Greece

This onee has been reposted. Enjoy.

got hear via search for Murdoch, who I used to see in MOntreal, but darned if I can't find any music. Is it somewhere?

some surprises for the old fans.. and treats for fans to be.. promises to be his best sounding, down-to-earth outing to date....

how do I know ? I'm involved

Bruce Murdoch's CD is available now. My copy arrived in the mail today, it's fantastic.
http://brucemurdoch.com/ has information about the CD and links to clips on YouTube.

Bruce now has a Myspace page, where you can read his story, hear his songs and watch him performing some of them on Youtube:

Any chance you can repair your broken link to Bruce's music, Max?

I'll try to get it reposted sometime this week.

hey, any chance for this to get reposted? Thanks a lot!