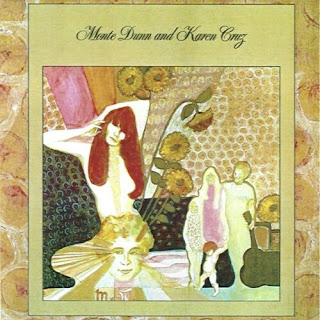 Well I managed to get a new record ripped and posted for this week. A fine but not particularly well-known folk-rock outing from 1969 that was on the Cyclone label, from the husband-wife duo of Monte Dunn & Karen Cruz. Cruz wrote most of the songs (with the notable exception of Tim Hardin's "Yellow Cab" & their cover of that song is better than the original). Dunn contributes guitar, and they both sing.

Monte Dunn was well known as a guitarist on the folk scene having played with Phil Ochs, Judy Collins, David Blue, Buffy Sainte-Marie, Tim Hardin, and even Cher (among others). Cruz had sung solo and with others. When they married they managed to produce this one record before going back to session/backing work.

The music is excellent folk-rock/country-rock with good vocal harmonies and musical accompaniment (including contributions by Eric Weisberg, Bruce Langhore & Hal Blaine). It has a nice laidback, late-60's vibe and some well-written love, nature, and anti-war songs, which (perhaps unfortunately in the latter case) are not at all dated.

man hoiw did this one not get reissued? ms. cruz has a wonderful voice and seems comfortable singing in any genre. this is one of those albums where the artisys just said let see what we can do and do it well. the loungey "loving you" is especially well done.

Out now (or coming out) on Fallout.... Sounds great.

Either I'm too tired and am missing something, or Mass Mirror isn't allowing access to downloading. I find nothing in their new format that says "Download here," nothing offering the download option. I have the Dunn/Cruz LP, which I bought in '69-'70, but would've liked to hear it cleaned up for CD. Can't do it w/ Mass Mirror as it now is. Thanks all the same. -- smitty123

Hi Smitty,
It does appear that Mass Mirror is down--hopefully not permanently (since Shareall is now out of business). You may have seen my more recent post noting that this album is now available on CD from Fallout records. You may have also seen the comments noting that Fallout is a bootleg label that doesn't pay royalties unless forced to. That said it was my intention not to repost this record once the link died but I will post it once more on a short-lived server. However, this is not a CD rip nor is it CD quality--your vinyl is probably better in the long run--although it is a fairly clean vinyl copy.

So how did you come across this amazing gem? It is especially dear to my heart as these are my parents! Yes, that little red fraulein was/is actually me.

What does out now or coming out on Fallout mean exactly? Would love to connect with you about this. Thanks, Jesse Dunn

I forget where I first heard of the record, but I first heard it poking around in a college record library. It's a fine album and you should be proud. It is available on CD: http://www.amazon.com/Monte-Dunn-Karen-Cruz/dp/B0017PCWMG/ref=sr_1_1?ie=UTF8&s=music&qid=1273608036&sr=1-1
Hopefully there are some royalties awaiting.

The red-haired little girl is my sister, Jeese, or Jessila-- the "red haired Fraulein" would be our Mother, Karen Cruz :)