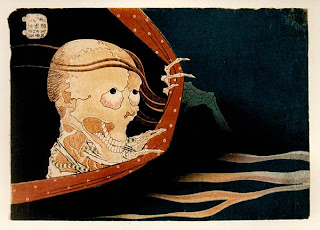 Since my computer issues are still not entirely resolved I've decided to take this week off (at least as far as posting music goes), but I did have some news about a number of blog-related topics that I wished to impart. All of it totally unrelated to the picture above.

First, it seems I've finally been hit by the deleter(s) and that a number of my older posts have been removed from Rapidsh#@! Never mind that these are unavailable on CD, out of print in other media, and (for the most part) produced prior to 1972 and therefore unprotected by Federal copyright. So I'm in the process of reposting those dead links on Massm-rr-r. So far I've posted new links for Smokey & His Sister, Pete Kelley, Sesame St. Disco & Rabbit McKay.

If there are any other specific dead links you'd like reposted you can also drop me an email or leave a comment & I will try to get them up ASAP. Otherwise I'll just be checking and reposting at my leisure. Also note that the Happy Feeling link has been permanently deleted as I've been informed that a CD reissue is on its way (from superoldies.com although they don't have any info up yet). Since it looks like there will be Cake & Jim Pepper reissues coming out soon those links will also be going away soon.

Also, I recently got an email from Andy Zwerling, who's Spiders in the Night was posted here a little while ago. His 2-CD collection Somewhere Near Pop Heaven is available again from his Web site. While it is quite different from the earlier record, it is also excellent in its own right & a must have for powerpop fans & people who just like well-written, well-performed pop/rock tunes about love and related topics. The record made it into the top 20 in Croatia in 2004. He also has a new record coming out sometime this year.

Finally, in the "where are they now" category here's some fine investigative reporting about one-time teen idols, the Banana Splits. Unfortunately because there is a pretty widely released CD bootleg of their album available I won't be posting it here, but it's still nice to know what happened with the one of the 60's finest TV bands (right up there with the Monkees & the Archies).

What a treat to see the Banana Shplitz again.

those kroft kid tv shows were so far out - it makes you wonder if they drank mushroom tea at the writers' meetings.

What a farbissineh kopf you are! You better sleep with one augen open!