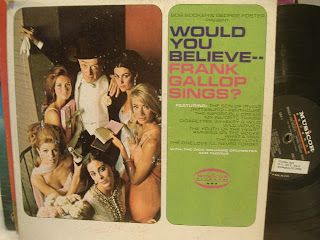 Well it's been longer than I'd like since my last post. I've been busy with other things and I don't see that changing for a while yet so for the time being I will be posting new records less than weekly--I promise at least one post a month for now & I'll try for two. I'll also keep the repost coming per your requests (this week I reposted St. George & Tana and Colonel Jubilation B. Johnston and His Mystic Knights Band and Street Singers).

So what about Farnk Gallop? He is probably best known for his contributions to 60s-era hit comedy records like You Don't Have to be Jewish & the First Family and for his top-40 novelty number, The Ballad of Irving. He also had a career as a TV & radio announcer and host.

I was always a fan of the Ballad of Irving (perhaps because the bad guy is called "Bad Max"), and this album has a sequel to that song. It also has some somewhat humorous versions of popular music standards and a few other songs that are a bit dated.

The music is in mono and has a few more clicks & pops than I would like. I hope you'll enjoy it or at least be mildy amused.

And remember Irving:
One day Bad Max happened into town.
His aim was to shoot fat Irving down.
Bad Max said, "Draw, and draw right now!"
And Irving drew, drew a picture of a cow.
Posted by Max at 12:08 PM

I have to check out this one, sounds interesting. by the way: thanx for adding me to your blogroll, will add you to my blogroll in the next minutes. keep up the good work!

Thanks for this rare item. Regards.

sadly i'm getting a search page as results. Could you repost this please? thank you. and let me know if you get this please. mr_Stress@rogers.com if you can't post I'd appreciate getting it through ftp or email :)

Will repost it soon.

Any chance of a repost of this? The link is dead. I've been looking for it forever. Much appreciated.