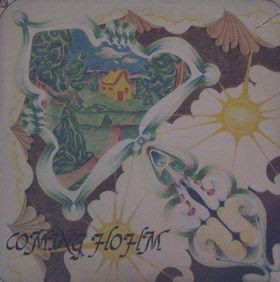 My apologies for being late again with a new post--even on the every 2 week schedule I managed to be a couple weeks late with this one. Also, while I'm apologizing, I should also point out that the sound on this one leaves something to be desired. However, I hope the relative rarity of the record will be compensation enough.

Rosemary Haddad's Coming Hohm is described by one of the reviewers on the Acid Archives site as "one of the best hippie commune albums" and I'd have to agree. Great psych-folk with a joyous message. Some of it sounds like it could be Christian but at other times it's definitely Hindu and all of it is infused with a hippie sensibility that keeps it from ever sounding dogmatic. In the end the message is not so important as the delivery, and Haddad is spot-on with her vocals while still coming off as a amateur, interested in the joy of the experience rather than trying to sell records. Some fine flute, acoustic guitar, and percussion compliment her songs.

Here's the tracklist:
Side 1
Coming Hohm
It's alright now
Spiritual Slavery
The Nest
The Great Siddha
Side 2
I am the Lord
Steady in the Flow
Lady Kali
Sing with your Heart
The Kitchen Floor Song
Reprise

This one is not my rip (thanks to jflyaway for it) and as mentioned it's pretty noisy at times. I did split the original side long rip into songs and started to clean up the clicks and pops on side 1 but then I listened to side 2 and realized that there was just too much noise to really do a suitable job (although I removed some of the nastier ones). So much of the noise remains, but unless your willing to fork over $500 this rip is probably the best chance you'll have to hear this gem.

the track "Lord Kali" is stunning
the most beautiful song i heard this year, somehow we just have to get a better rip of side two

I do not possess the straw of schlaffen. Nevertheless, I am going to get you.

For registration send e-mail to:
hippidetrippi@hotmail.com

Yeah , this is good.
Anyone got $500 bucks spare so we can get a better transfer? :D
Thanks!

We are WE’RE LATE FOR CLASS, an independent improv band that gives away our music. We’ve just released our 20th post, A Collection, and it features our best work from the last year.

We’re writing you in hopes that you might post our new album on your fine blog. It would mean a lot to us to reach your wider audience... and to just be acknowledged by other bloggers like yourself would be a treat. Here’s a link to get all of the codes for the cool animated cover and full album MP3 player, should you like to post them for your readers...

And you can see how all this looks on our own blog...
http://werelateforclass.blogspot.com/

Of course... there’s nothing in this for you, except a “thanks.” We will, of course, be thrilled to include you in our blog’s link list, “Bloggers Kind Enough To Promote Us Even Though There's Zilch In It For Them.” And, we’ll even love you for it, too. Heck... maybe even some of your readers might appreciate something out of the ordinary. So you’re fully aware, however, we are also contacting a few other friends and blogs to get as much exposure as we can. Since we’re not profiting from this venture, we can only hope the blogging community will help out one of their own with much needed promotion. And... the cool animated gif (which works perfectly in Blogger) will look great on your page and draw plenty of attention. Even if you don’t want to make the space, a link would be most welcomed (and drop us a comment so we can reciprocate). Should you need anything else, just let us know.

We’re Late For Class is all improv and pro-herb, so an altered state of mind is highly recommend for optimum listening pleasure. You never know... you might even like us. We can be reached at werelateforclass@hotmail.com. Please feel free to tell us what you think. We’ve got thick skins and would love the feedback. Above all, thanks for taking the time to read and consider us. PLEASE FEEL FREE TO DELETE ALL THIS CRAP FROM YOUR COMMENTS!
All the best...
WLFC

I'd be happy to add a link to your blog and will certainly listen to the music you have posted there. As for posting the album here, it doesn't really fit with the format of my blog--I only post albums that are out-of-print and only issued on vinyl (and possibly tape) but not CD. Thanks for the comment & the music!

Many thanks for the reply and the linkage. Very appreciated and we'll do the same.

For the record, though... this is not a CD. We are a blog only band that gives our music away for free on our blog only.

Many thanks again.
All the best
WLFC

Thank you very much,

Superb album, full of joy, and make you happy each time you will hear it.
Just after a feww seconds you will be "inside".
Thanks a lot for it
Noel from Belgium .

nobody's mentioned who is the Guru of these guys?
an American jeweler-turned-holyman Lee Lozowick

"nobody's mentioned who is the Guru of these guys?
an American jeweler-turned-holyman Lee Lozowick"

Thanks for the lead, ge.

Found half a dozen tracks on his My Space page - not bad for an alchemist/guru, sounds a bit like TVZ - but I was more impressed with his band (very tight) and his female back-up singers.

Lee Lozowick is an alchemist songwriter, poet and author who combines down-to-earth lyrics with rousing performances to move
audiences from all walks of life. Based in Arizona, he is the lead singer for the European band The Lee Lozowick Project, as well as
the American blues group, SHRI. He has been hitting the road for 20 years, playing all the independent American and European blues and rock venues.
The Lee Lozowick Project has put out 2 solo albums with his own original lyrics, produced and composed by Paul Durham of the
renowned American rock group Black Lab, as well as 2 albums recorded live on tour in Europe and India.
Lee learned the ropes as lyricist and singer with the rock group Liars, Gods and Beggars (LGB) that he created in 1981 and with whom he toured for 12 years. The group had self-produced and distributed ten thousand albums by the time it disbanded in 1999.
Starting in 1989, Lee also toured in Europe, playing at the Hamburg, Berlin, and Magdeburg festivals.
Encouraged by fans and musicians to perform his own lyrics in a new music project, The Lee Lozowick Band formed in 2006 and now hosts its own annual European Tour. : ~ hohmpress.com

I could listen to more if anybody can come up with anything.

Hi Eric,
Thanks for posting some more Lozowick! You can hear some of his blues-oriented cover band here:
http://www.leelozowickproject.com/listen-now-songs.html
Not as interesting but if your completist it's worth a listen.