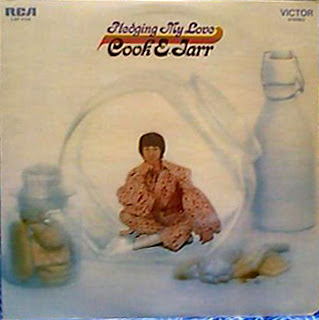 I had intended to rip and post this some time ago but just recently found another, quality rip (thanks to the great Tamara from the 1960s binaries news group) and decided I would post that rather than going another week without a post.
Cook E. Jarr's first album is a pleasant and at times soulful slice of pop music with full orchestral arrangments and occasional choruses. It may sound a bit overproduced to contemporary ears but Mr. Jarr sings it with feeling and generally has fun with the material. He also makes a fine selection of songs to cover including FOUR Tim Hardin compositions (his version of Red Balloon is my favorite track on the album) and versions of Knock on Wood, Pledging My Love, Do You Believe in Magic, and the title cut.
Cook E. Jarr currently resides in Las Vegas where he has a popular lounge act and the same haircut he featured on the cover of this album. He has two more recent CDs available on his Web site. Next time you're in Vegas you should check him out and if you like this give his new CDs Almost Grown & Old School, New School a listen.
You can hear this album here.
I will be back with one more post this month (the self-titled Epic records release from Yanoska) to keep up the new twice a month schedule. I'm also making an attempt to update the links list & have tracked down a number of great, new blogs to add there.
Posted by Max at 12:28 PM

For registration send e-mail to:
hippidetrippi@hotmail.com

thanks for adding me in your links. I've already done the same. Great blog btw.

Hi. Would you reupload, please, Plaster Caster Blues Band. Thanks.

Michael Yanoska?? His first album?
That would be great! My brother has an original vinyl copy. (see Michael's website where he his mentioning this)
Michael is still active in the
music business and he deserves more credit.
He just had a new album out: "chronicles". Buy it!!

This one has expired. Could you reupload please? (I really must visit more often, rather than my usual habit of blitzing the blog every once every few months or so. LOL

Will get this and the others up soon. I do the same thing with blogs--there are an awful lot of them out there to keep up with.