The End of My Blog? 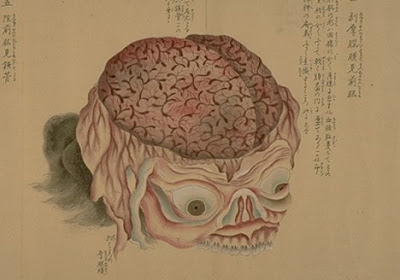 Aaaarrrrrgggggghhhhh! My external hard drive, on which was stored my music rips along with a hell of a lot of other stuff appears to be dead. I had just about finished fixing the Aesop's Fables lp I had promised to post but that's not going to happen now. I could rerip a whole bunch of records and perhaps I will but right now I feel pretty discouraged. So at the very least expect a few months hiatus before I return to blogging. My brain hurts.

UPDATE: Upon reflection and after receiving words of encourgement I will be returning to blogging but definitely need some time to rerip, etc.--so expect a new share in 2 or 3 months (most likely the Aesop's Fables record, since I had promised that).
Posted by Max at 1:34 PM

If you give up... the terrorists win!

Mind you, if you don't give up, the terrorists still win, but if you give up, they definitely win!

Hang in there! You have a great blog, and I'm sure it'll be worth the wait.

Best of luck to your hard drive & data recovery efforts.

Thanks for the words of support. Actually, if I give up the makers of crappy external hard drives that crash 3 weeks after the warranty runs out (i.e., Western Digital) win.

Data recovery is too expensive to be an option at this point, but I will try to rerip some lps after I take time to restore some other lost things.

I hope you don't give up, you've posted some really good LP's; the Rosemary Haddad one gets played almost daily by me :)

Without knowing the detailed symptoms, perhaps the problem is not the disk, but the actual interface ( USB2 ?), it should be possible to disassemble the enclosure, remove the HDD & try connecting it to an internal PATA or SATA as appropriate.
If it is a HDD failure, then it *may* be possible to retieve some data by the 'freezer' trick ( google for details), I have had some success myself with this method. Good luck & don't give up hope!
Cheers!!

Keep on fighting the good fight! You have a great blog so we'll be waiting.

thanks for past shares, will miss some gems if you faide aweigh, aboo ahoo

I've crashed 2 hard drive with gigs of music so I know your pain!!!

Hang in there Max, hope to see you back soon.

This blog has been indexed by (R.T.S.S.E) Real-Time Statistical Search Engine internet technology. Leaving this comment posted on your blog will automatically send traffic from our search engine to your blog for free.

Try our Free Blogger Tool, and Blog by Statistics now!

Thanks for sharing some great music. Great blog! Good luck with the hard drive.

You can avoid this sort of headache in the future by purchasing an INTERNAL hard drive and an enclosure that allows it to be used like an EXTERNAL hard drive. It simply connects to your PC via any available USB port. This way, should your drive start to acting all sorts of funky on ya, you can simply remove it from the enclosure and hook it up to an existing IDE cable inside your PC as a 'slave' drive. There are numerous data retrieval software products on the market that would allow you to recover your stuff. I would also strongly suggest performing routine backups of your files. Burning data DVDs is a great way to store seldom accessed files and archive them for later use. :)

hope to see you soon max. I never had the chance to write to you a couple of good words about your effort; I hope this counts even under your situation

I lost THREE TERABYTES of my music collection last year to hard drive crashes, so don't feel too bad. It happens to all of us, and it teaches us that backing up is essential. Hang in there buddy, and thanks for all the albums.

I have tried data retrival software, freezing the hard drive, removing it from the case and placing it in my computer, and a dozen other things with no avail. I do back ups to CD but have gotten way behind and actually most of what I lost was music I had never listened to--and I'm OK with that--what's bothered me more is losing all the files for my posts, including those I was working on. There's a few I'll need to ask for help reclaiming (since I don't want to go ripping and fixing all these files again). I will continue posting again after a break to sort things out. Thanks to everyone for their words of encouragement.

I just discovered this blog here and I'm sorry to hear about your problems with it... Looking very much forward to the new posts!

feel no fear, i know you'll be back on yr feet again in no time. do whatcha love! all best, - a.m.s.

I think you should have backed it up on external media before sharing. It would be real cool if all your posts were flac compressed wav rips, but I'm not getting my hopes up.

my desktop's master internal HD was "operating out of parameters" so I bought new one. In the meantime the external backup drive data got corrupted. I believe now it's from not using the "safely remove hardware" feature. I guess the MFT got messed up.

So I put in my new master HD and put the old one in as slave and was able to copy about 99.9% of my files onto a new 500gb external drive. Only lost my Herb Alpert folder and some AC~DC.

I re-formatted the corrupt external drive and now I use double backup and always disconnect ext. drives properly.

Close call! I have invested weeks of time in my collection.

I feel your pain - Zeek!

Pretty nice place you've got here. Thanks for it. I like such topics and everything connected to them. BTW, why don't you change design :).

Max, people change their blogspot design template all the time. I know because I save the pages when I download an album, and if I revisit the page some time later, the template has changed but nothing else has.

I know you can change it, but it doesn't always work perfectly. My wife changed our daughter's blog once and lost a bunch of pictures. I guess I don't feel strongly enough about the design to risk it. Or maybe I'm just lazy. I'm having a hard enough time getting myself to set up my turntable again to record a new post.