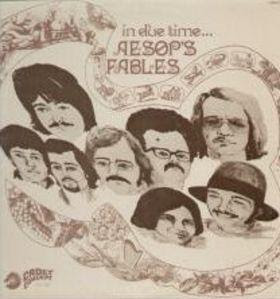 This one has been a long time coming, as this was promised about a year ago and this is the 2nd time I recorded it.
Aesop's Fables only released this one album on Chess Record's Cadet Concept imprint and as such it's one of only a couple of real rock records on Cadet Concept (the other I know about is the 1st Status Quo album). The music is inconsistent and varied in style. A lot of it falls into the horn rock genre popular at the time (e.g., Blood Sweat & Tears, Rare Earth), which is not my favorite style of rock music and biased me against actually posting this for a while, but there are some other tracks that go into blue-eyed soul and psychedelic territory and are more to my liking. The band is excellent especially when one or all hit a groove like the organ freak out on "In the Morning" and pretty sublime, psychedelic jamming on "And When It's Over." Lyrically I'm not as impressed. They also cover "I'm Gonna Make You Love Me" and (to greater effect) Bert Sommer's "And When It's Over."
Robert Gallo who turned out a lot of tax write-off releases has his hands all over cowritting a lot of the songs, as well as arranging and producing. The band consists of
Ronny Alterville -- bass, guitar, backing vocals (1967-69)
Sonny Bottari -- vocals, percussion (1967-69)
Robert DiMonda -- flute, sax, backing vocals (1967-69)
Joe Fraticelli -- sax (1967-69)
Frank Krepala -- guitar, backing vocals (1967-69)
Louis Montaruli -- trumpet, trombone (1967-69)
John Scaduto -- vocals, drums (1967-69)
Barry Taylor -- keyboards (1967-69)
And here's a tracklist
SIDE 1
1.) Lift Up Your Hearts (Barry Taylor - Ronny Alterville)
2.) What Is Soul (Robert Gallo)
3.) In Due Time (Robert Gallo - Segal)
4.) In the Morning (John Scaduto - Robert Gallo - Ronny Alterville
5.) Everyone's Talking (Robert Gallo - Segal)
6.) Spoons Full of Sand
SIDE 2
1.) The Sound of Crying (Sonny Bottari - Barry Taylor - Ronny Alterville - Heins)
2.) What Is Love (Robert Gallo)
3.) Look Out (B. Bottari - Barry Taylor)
4.) I'm Gonna Make You Love Me (Jerry Ross - Kenny Gamble - Williams)
5.) And When It's Over (Bert Sommer)
You can hear the music here.
I should note that you may hear a bit of distortion, especially in the quieter moments. I don't want to go into the whole story--as I know I complain about my computer set-up too much already--but I recently installed an exterior upgrade for my Creative sound card and it has a number of useless features one of which (the 24-Bit Crystallizer) was accidently turned on during recording. Suffice it to say I won't be using it again.
Posted by Max at 9:11 AM

Hello Max,
Thank you ever so much!!!

This is indeed a rarity, and one that is making the rounds for quite a bit of dough. I can't thank you enough for taking time out of your schedule to share it with us all.

Excuse me? Rare Earth-Horn Rock? You've obviously never listened to them. They did have a flute on Born To Wander, but no horn section.

Jon,
Sorry--I must be thinking of some other Motown rock band. Maybe it was Puzzle?
Max

Hi Sean,
Thanks for the info. I can't help you since I haven't seen either of those albums but hopefully someone will stop by who can.
Max

What a suprise to see this one posted. This version of I'm Gonna Make You Love Me has always struck me as the superior version. It was a hit on some markets (InRochester, NY where I lived) but is more known in The Supremes and Temptations 'duet' version. Personally I never 'got that one and I did like MAdeleine Bell's version (on Phillips as I remember seeing as how she was with Blue Mink at the time. I know there also was an earlier version by the late great Dee Dee Warwick.
Thanks for the memories.

Max
A Bill wrote me but I don't know how to write him back...Can u help please? Thanks, Kathe

This is a blast from my past. These guys used to play at Patchogue High school Dances back in the sixties. They became friends as many of us did in the Long Island Music scene. The last time I saw Barry was in scaresdale NY at a dinner he was playing in a gospel band with This girl singer Vanessa. Those were the days. We all knew each other my bands, the rascals, the hassels (billy Joel) the fables and too many to count. Makes me feel young again. These guys were Da Bomb. Originally four peices Barry Sonny Styles, Wally Bones and Frank the guitar player whose last name escapes me.
They had a bunch of singles on the ATCO label. One of the best all time Blue eyed soul bands ever.

Thanks for spotlighting Aesop's Fables. Their LP was recorded at Syncron/Trod Nossel Studios in Wallingford, CT, in 1968 and 1969. Their singles discography, including 4 singles on ATCO and 3 singles on CADET CONCEPT, plus titles of unreleased recordings, are in my book titled "Connecticut Rocks!" Info from me at PBezanker1@aol.com. Pleaes include "CT Rocks" in subject line.
Paul Bezanker

hey man, good job, but you are too apologetic! Don't stress if you don't get those posts up in time. We have to live physical lives first, this blogging should be a hobby, not pressure.
If someone's hounding you for a release..just chill!
If you want better sound from your rips, move away from Creative products. You need something like an external device. When you have a sound card, inside the computer, there is inherint distortion and other issues because of the lack of sheilding. The best and most economical solution, is to Go EXTERNAL FIREWIRE. And if you have harddrive crashes,, why aren't you making a Mirror backup of your stuff??? Just set up a simple raid of your main collection and you won't have worries again. You can't predict hardware failure.

just some constructive ideas, from a fellow rare -oop- LP rip-to share individual. Once you go 24/96 firewire , you won't go back to PCI cards..EVER. ...oh and make sure you have at least a microline cartridge/stylus , to get that information that floats above 22,000 cycles.!!! or 24/96 is a waste, might as well stick with older technology.