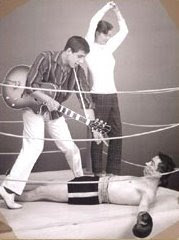 Just wanted to let fans of Andy Zwerling and Monte Dunn & Karen Cruz know that the former has a new album and the latter a reissue.
Andy's new record, Hold Up the Sky, is now available from the artist's Web site and you can sample some tracks on his myspace page. Like his previous releases it features some great pop songs done in a variety of pop styles, ranging from a sort of jazz-lounge track to a couple nice indie pop numbers. Lyrically it may be a bit darker but it all fits together well. I recommend it highly.
Also, the Monte Dunn & Karen Cruz has been reissued on Fallout Records, which is the new imprint from the owners of Repertoire Records. However, like Repertoire I suspect Fallout is a bootleg label and doesn't pay any royalties so I'm not in any hurry to take down the rip I posted, which is my usual policy when one of these records gets a CD reissue. I may do so in a month or so or just won't repost when that link expires.
Finally, I'm set-up again to do some recording from vinyl and as I write this I'm copying the Aesop's Fables lp. Expect to see it posted in a week or 2. After that, I'll try and keep up with a new post every month.
Posted by Max at 1:43 PM

I'm sure that somewhere I've read/heard that Fallout was basically the notorious Radioactive Records renamed? Many similarities in catalog numbering scheme and (poor) artwork repro.
I have also mused that they must be slightly more legit, as some of their reissues have been on bigger labels, who I would have thought sued them at the drop of a needle ;)
Cheers!

Saw this posted on the fab redtelephone66 blog;

"Fallout is a total bootleg label. They are a typical British bootleg label like the ones of the 80s and 90s but this time they are dressed in fancier clothing and somehow they get their illegal boots sold on Amazon.

Like many British bootleg labels of the past what they do is they illegal reissue albums by obscure former American rockers who they assume have no idea that a piece of their past is being reissued and most of the time they don't because they are older and they have moved on.

Fallout is an example of a new kind of bootleg label. At first they were not going to pay (Bobby) Jameson anything but then when they found out that he knew of the reissue, all they gave him was a box of 500 disc and $1000. If they would not have been able to get in contact with him, do you think they would have cared if he would have knowledge of the reissue, probably not."

comments posted regarding Fallouts reish of Bobby Jamesons 'Color Him In', which I recall you posted some time ago

Thanks for the info on Fallout. Since someone requested the chance to download the Monte Dunn & Karen Cruz I will leave the post up for a while longer.

Hello Max,
Glad to see you up and running again, and thank you for the coming Aesop's Fables lp, Would there be a chance of posting the Douglas Leedy "Electric Zodiac" anytime in the future?

Hi Leonard,
I'll try to get to the Leedy following the Aesop's Fables, which should be up this week.
Max