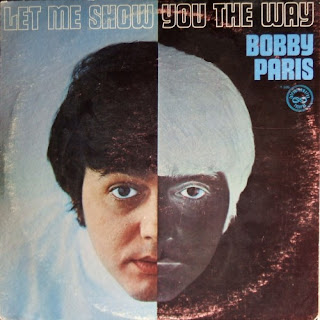 Bobby Paris began his singing career as a member of the Golden Keys doo-wop group, and in addition to this album on Tetragrammaton he recorded a number of singles over the years (see discography here). Paris typically gets labeled a "blue-eyed soul" singer, but as he's Puerto -Rican "brown-eyed soul" is the more appropriate label. There is no doubt that Paris is a powerful and soulful singer and, as you can hear on this album, he can really belt out a song about a broken relationship.
in addition to singing and songwriting (he composed most of the songs on this LP), Paris also worked as a producer, co-producing Bobbie Gentry's "Ode to Billy Joe" among other tunes. There's an online interview, if you want more information on his career.
So what about this record? Well, it starts out really strong, and Side 1, which consists entirely of his own compositions, includes some great soul (a few of which became hits on the Northern Soul circuit). Stand-out tracks include the uptempo “Per-Son-Nal-Ly” (which sounds like something Tom Jones could have made a hit out of) and “Out of Key” (which has some more reflective moments between the soaring choruses). However, Side 2 attempts something more and fails in the process. It’s an extended song cycle that feature a couple originals and some classic cuts interspersed with brief spoken passages. There are some good original songs on Side 2 as well, but the spoken interludes, which sound like rejects from a Rod McKuen record, detract rather than add to the experience, and the there’s way too much pathos on some of the covers (you kind of expect him to break down crying in the middle of “Bye, Bye Blackbird”). Paris might get points for trying to conceive a narrative to link the songs, but loses them for his annoying attempts to explain the narrative arc. However, overall this is a decent album with some fine songs and great vocals, but it would have been better if he had attempted a little less. The production could also have been better on this one--it sounds kind of muddy at time--but that may also be because I've only got the mono version (the record was also released in stereo).
Here's a tracklist (although Side 2 is labeled "The Cycle" as a whole and the spoken word pieces also each have their own name, which I've left off here, as they are best forgotten):
a. Out Of Key
b. I'm So Lonely
c. Per-Son-Nal-Ly
d. No No No Girl
e. I'm Not That Kind of Man
f. Going Out The Way I Came In
-------------
g. Let Me Show You The Way
h. You
i. Please, Mr. Sun
j. Tragedy
k. Don't Let The Sun Catch You Crying
m. Bye bye Blackbird
The recording is (obviously) in mono and encoded with a VBR-extreme setting. You can get it from r-share or m-fire.
In other news, I was also sent a cleaner recording of the first Pollution album, which is now available in place of the older recording. Also, I've gotten a couple requests to post the Angel, Angel Down We Go soundtrack now that's it's no longer available on another blog, and will try to do so in the coming months. Stay tuned for more good music--I picked up a bunch off odd folk records at a thrift store recently and still have a backlog of records I wanted to post from before. Next up, though, is the 1969 country/rock release from Willis Hoover entitled Hoover.
Posted by Max at 9:02 AM

Hi from Cy
Thanks, and after a quick listen I fear, later, we will have to kick off our shoes and do some bare footing round the living room.

Ah.....spoken passages?
A true poet leaves his words as ether, bad poets make us wince, Bobby Paris? I'll have to wait to listen to the second side as a mood piece, so will reserve judgement.

Now if his words and voice comes anywhere near Richard Brautigan on Mad River then good on Bobby but I fear, in putting him down, you may be right Max.

Thanks again for this.
Have a good day.
Cy from Portknockie.

Hello Max,
I just discovered your blog.
It look's like some great & very interesting things to check out.
I'll let you know as I explore further.
I read where you will post the "Angel, Angel Down We Go" soundtrack.
COULD YOU PLEASE? I've been searching for it for an EXTREMELY long time. GREAT FILM & GREAT MUSIC!!! Others will discover & appreciate it very much I think.
Thanks Max,
CH

Hi Max, very good record, power soul of a very good level, Only one request about the rips, just as a recommendation if you like.
Please try to make them at least 192, the highs are too loud and a lot of the sound quality is lost, Think that if you spend the time to make vinyl rip it's a pitty to bitrate them in a low quality. thanks for all the good music!

Hi Miguel,
This is certainly not a low-quality bit rate--it's a variable bit rate at the highest setting available--since it's a mono recording and the average bitrate is about 134k that would be the equivalant of an average rate of about 264k for a stereo mp3. Constant bit rates are usually unecessary since they record the silences at the same rate as the sound, etc. Now it isn't the best quality recording--as I mentioned--but I think it has more to do with poor production on the record.

just wanted to say how much i like your blog and the obscure rarities you unearth via thrift shops and the like. it's like a parallel history of popular music with an emphasis on those who didn't have long careers but still made interesting music. thanks for your work, much appreciated...bk

Hey Max, I love your blog. I have posted a few out of print records on vinyldustbin.blogspot.com - if you are interested in reposting them on your blog, please feel free. I've got a couple of very rare folk records that I'd love to reach more people with, since they will pretty much never be re-released ever.